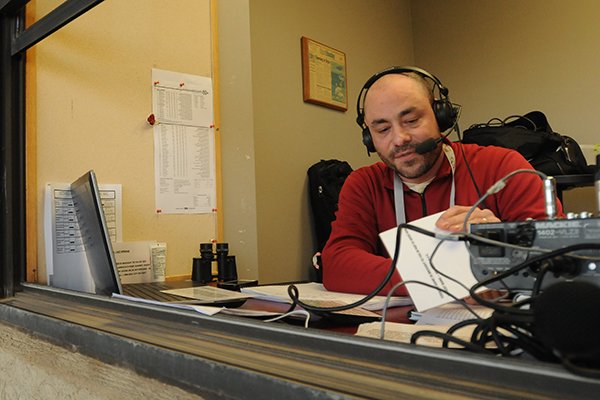 Arkansas play-by-play announcer Phil Elson prepares prior to a game against North Dakota on Friday, Feb. 13, 2015, at Baum Stadium in Fayetteville.

FAYETTEVILLE — Arkansas baseball's radio play-by-play announcer won't call anymore games in 2015 because of a personnel matter, according to a statement from IMG Radio Network.

Elson didn't call Sunday's regional championship game in Stillwater, Oklahoma. A spokesperson for the Razorbacks didn't give a reason for Elson's absence.

"This is personnel matter, which we don’t comment on," IMG spokesman Andrew Giangola said in an email.

According to IMG, Alex Perlman will call Arkansas' remaining baseball games this season. Perlman is the university's play-by-play announcer for games it produces on the SEC Network.

Elson is in his first season as Arkansas' radio play-by-play announcer for baseball and women's basketball. He previously spent 14 seasons as the radio man for the minor league Arkansas Travelers.