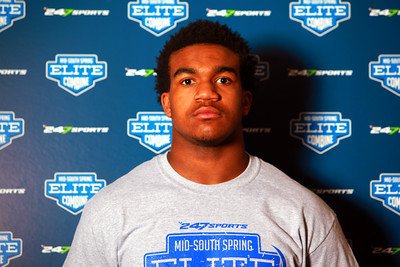 Arkansas is taking a hard look at linebacker Tyrel Dodson.

He recorded 81 tackles, 16 tackles for loss, 6 sacks, 4 interceptions and 2 forced fumbles along with 738 rushing yards and 13 touchdowns while missing three games while being hampered by an injury. He’s hoping to see the Hogs extend an offer.

Linebacker Donta Evans, 6-3, 230 of Lawrenceville, (Ga.) Archer said he and his father are working on a date to visit Arkansas this summer. He's talking to defensive line coach Rory Segrest. He has numerous offers from schools like Auburn, Louisville, Iowa, Kentucky and others. Video highlights CLICK HERE

Defensive lineman Michael Perry, 6-2, 330 of Memphis Whitehaven said he plans to take part in Arkansas' camp on Saturday. His top schools include Ole Miss, Indiana and Missouri. He said Arkansas will make his top four after he earns an offer from the Hogs this weekend. Video highlights CLICK HERE