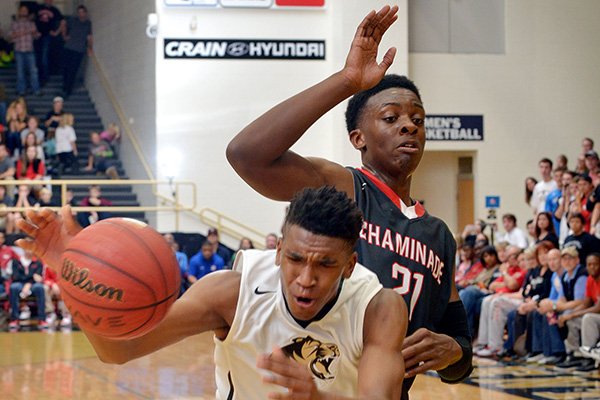 Malik Monk of Bentonville drives against Tyler Cook of St. Louis Chaminade during the game in Bentonville's Tiger Arena on Saturday Nov. 29, 2014.

Highly recruited power forward Tyler Cook said his weekend visit to Arkansas has helped the Hogs in their recruitment of him.

Cook said the thing that stood out during the trip was that Coach Mike Anderson and his staff recruits good character kids. He liked that the atmosphere around the program gave him a home feeling. He thinks the practice facility will be one of the best ones in the country.

His mother, Stephanie was also impressed that the coaching staff recruits good kids. She said that's not always the case with other places. She would have no hesitation in supporting her son if he decided to be a Hog.