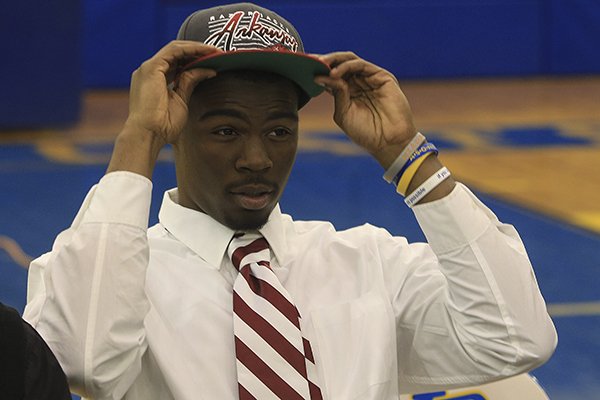 North Little Rock's Juan Day puts on a Razorback hat Wednesday morning after signing to play football for the University of Arkansas.

FAYETTEVILLE — Arkansas running back Juan Day will miss the remainder of spring practice after suffering an anterior cruciate ligament injury.

It is the second ACL injury Day has suffered in less than two years. He tore the ACL in his opposite knee in 2013, forcing him to miss most of his senior season at North Little Rock High School.

It's unclear whether Day will be cleared to play any during the 2015 season. ACL recoveries typically last around six to nine months.

Day was the most likely candidate to be the Razorbacks' third-string running back behind returning 1,000-yard rushers Jonathan Williams and Alex Collins.