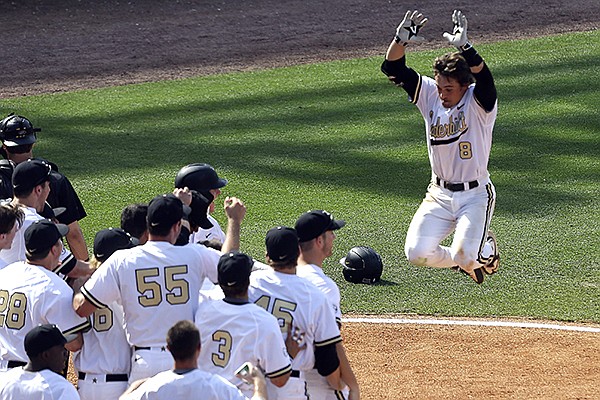 Vanderbilt’s Rhett Wiseman (8) jumps into the air celebrating as he approaches home plate after he hit a walk off home run during the 10th inning of a game to defeat Missouri 7-6 at the Southeastern Conference college baseball tournament at the Hoover Met, Wednesday, May 20, 2015, in Hoover, Ala. (AP Photo/Butch Dill)

HOOVER, Ala. (AP) — Rhett Wiseman hit a walk off homer to lead off the bottom of the 10th inning, powering Vanderbilt to a come-from-behind 7-6 win over Missouri Wednesday in the Southeastern Conference tournament.

Vandy (40-17) rallied from a 6-2 deficit with two late homers before tying the game on a walk, single and error in the ninth.

Jeren Kendall hit a two-run shot in the seventh and Dansby Swanson's second homer of the game in the eighth cut it to 6-5. Nolan Rogers walked to open the ninth and scored on a single by fellow pinch-hitter Penn Murfee and an error by center fielder Jake Ring.

Kyle Wright (5-1) got the final two outs of the 10th for Vandy after Jordan Sheffield's five scoreless innings.

Ryan Howard went 3-for-4 with an RBI to lead Missouri (30-27), which falls into the loser's bracket. Brett Bond drove in two runs.