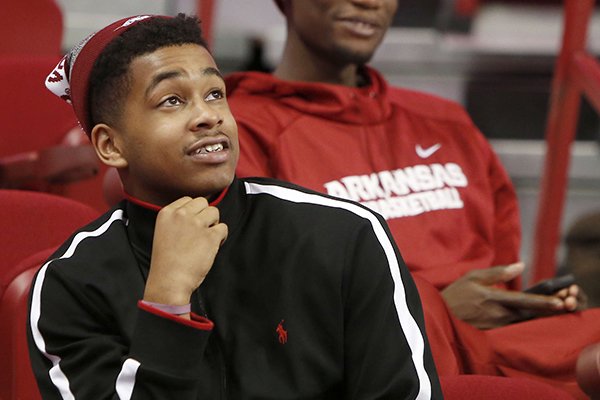 FAYETTEVILLE — Arkansas guard Anton Beard will be able to play this season after agreeing to enter a drug court diversion program in Washington and Madison County.

Beard was charged with three counts of forgery earlier this year after being arrested on suspicion of passing counterfeit money at Fayetteville businesses. Durrett said the charges against Beard have not been dropped and are pending his participation in the drug court program, which lasts 9-12 months.

"Drug court is not solely for drug offenses," Durrett said. "Mainly it's for first-time, nonviolent offenses."

According to a release from the University of Arkansas athletics department, Beard has been allowed to begin practicing again with the Razorbacks' basketball team but will be suspended from games through the remainder of the UA's fall semester.

Beard will miss at least nine games with the suspension. The earliest he will be able to play is the Razorbacks' Dec. 19 game against Mercer in North Little Rock.

Beard is the second-leading returning scorer for the Razorbacks after averaging 5.7 points per game last season. He started 16 games as a freshman, including both of Arkansas' games in the NCAA Tournament.

Beard, Dustin Thomas and Jacorey Williams were arrested July 22 for passing counterfeit money at three Fayetteville businesses. An arrest report stated all three admitted to using the bills on July 17-18 but denied knowing they were fake.

Thomas, who transferred to the Razorbacks' basketball team earlier this year, and Williams, now at Middle Tennessee, have been charged with one felony count apiece.

All plead not guilty to the charges in September. Durrett said Thomas and Williams have court dates scheduled for next month.

Thomas remains suspended from Arkansas' basketball program. He and Beard have been enrolled in classes this fall at the UA.

“We have taken this matter extremely seriously within our program,” Arkansas basketball Mike Anderson said in a statement. “Now that this matter has been resolved, we look forward to having Anton rejoin our program for practices and team-related activities.

"This is an opportunity for him to have a second chance and hopefully he has learned a life lesson through this process. We have a responsibility to teach and educate our young men and hopefully he will live up to the expectations we have set before him. Our student-athletes will continue to be held to the highest standard on and off the court.”

Forgery is a Class B felony in Arkansas and convictions carry a punishment of five to 20 years in prison, a $15,000 fine or both.

The arrests stemmed from a two-month investigation into counterfeit money being used at businesses in Fayetteville. According to an arrest report, all three were caught by surveillance cameras while using counterfeit bills at three different locations.

Beard used four counterfeit $20 bills to make purchases at three different locations near the University of Arkansas campus, according to the report. Beard also exchanged six counterfeit $50 bills for three $100 bills at one of the locations, the report stated.

“These were serious allegations and we treated them as such," Arkansas athletics director Jeff Long said. "All of our student-athletes have a responsibility to conduct themselves in an appropriate manner at all times. That will continue to be our expectation.”