Boys from Fayetteville get it done 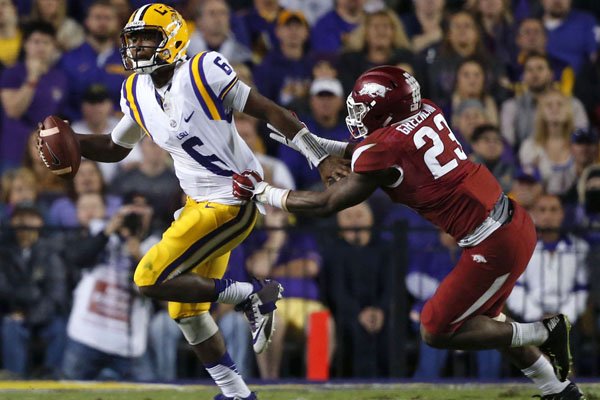 FAYETTEVILLE -- Linebackers Dre Greenlaw and Brooks Ellis combined on one of the biggest plays of Arkansas' 31-14 victory at No. 9 LSU on Saturday.

LSU, trailing 14-0 with 5:27 to play in the first half, had just picked up a first down at its 34 on a 6-yard run by Leonard Fournette to energize the Tiger Stadium crowd.

But the noise level dropped dramatically on the next play when LSU quarterback Brandon Harris was sacked by a blitzing Greenlaw, who caused Harris to fumble at the LSU 20. Ellis swooped in, beat Harris to the loose ball, scooped it and reached the LSU 11 before Harris hauled him down.

Things got even quieter two plays later when Alex Collins knifed through a hole up the middle for a 5-yard touchdown, his second of the night, to put Arkansas on top 21-0.

"I just think those two guys have big-play material and it's fun to see them both, obviously being from Fayetteville High and all that goes into it," Arkansas Coach Bret Bielema said. "We've been just kind of short on a couple of those breaks and that one was a huge one.

"I didn't know if that one was going to go upstairs for review because I didn't know if his arm was coming forward or not. It was obviously all clear and ready to roll."

Senior DeMarcus Hodge had a memorable night when serving as defensive captain while playing against LSU in his home state for the final time.

Hodge made back-to-back stops on Leonard Fournette for a combined minus-3 yards to defuse an LSU drive that had reached the Arkansas 46 late in the first quarter. Hodge brought down Brandon Harris on a quarterback run for a 4-yard loss early in the fourth quarter.

Hodge, from Monroe, was prominent in postgame pictures of Arkansas players celebrating with the "The Boot" trophy as the Razorbacks retained the 170-pound symbol of the border series for the first time since beating LSU in 2007 and 2008.

"It feels amazing to come back to my home state, get a big win like this, my last year and the last time to be in this stadium," Hodge said on the Arkansas postgame radio broadcast.

Arkansas' 299 rushing yards, highlighted by an 80-yard Alex Collins touchdown and a 69-yard Jared Cornelius touchdown, were the most allowed by LSU this season.

The Tigers had not given up more than 160 rushing yards in a game until Alabama ran for 250 on 55 carries in the Crimson Tide's 30-16 victory last week.

Arkansas held LSU to 59 rushing yards, 218 yards below its season average. The Tigers came in with an average of 277.3 yards per game on the ground to lead the SEC and rank No. 6 nationally.

Leonard Fournette, whose 173 rushing yards per game led the nation entering the weekend, ran for 91 yards, his second-lowest total of the year. Fournette, who has rushed for 100 yards in 12 of 22 career games, has 100 yards combined in two games against Arkansas on 24 carries.

"Fournette is very good once he gets his shoulders downhill," Bielema said. "And we felt, even if it took him 8 yards to run sideways before he turned downhill, we would get better people in position. That's kind of the way it worked out.

"I give a lot of credit to our guys to bow up. That kid's a man now. He's a very good player and we'll face him again next year."

Arkansas receiver Dominique Reed took his man deep, way deep, during Jared Cornelius' 69-yard touchdown run in the fourth quarter. Cornelius got a clean break around left end on the misdirection jet sweep, then used a good hesitation move to get free from a defender who had the angle on him. The only LSU defender with a chance, Kevin Toliver II, was down inside the 10 covering Reed, who turned and screened him.

"To see Dominique Reed block that guy down on the 10 yard line for like 30 seconds, I guarantee you Dominque Reed didn't come to Arkansas to block," Arkansas Coach Bret Bielema said. "But he does it because he's bought in, because he loves it."

Arkansas picked up 35 points in the Associated Press top 25 poll to come in just behind Toledo among the teams receiving votes grouping.

Ole Miss jumped back in the poll at No. 25 after a one-week hiatus, and Memphis, which owns a victory over the Rebels, fell out of the poll and behind Arkansas with 32 votes. Mississippi State, Arkansas' opponent on Saturday, has 25 votes, though the Bulldogs remained in the USA Today Coaches poll at No. 25 after its 31-6 loss to Alabama.

Former Arkansas All-American Darren McFadden showed support for his school on Twitter on Saturday with three posts related to the Hogs 31-14 victory over LSU.

McFadden, now a Dallas Cowboy, posted an iconic photo from Arkansas' 50-48 triple overtime victory in 2007 in Baton Rouge, La., with the Little Rock native holding up a small wooden bat with the scoreboard in the background.

McFadden attached a comment to a picture of the Razorbacks holding the Golden Boot trophy that read "It's a great feeling to hold that."

LSU Coach Les Miles shared a post-game hug with Bobby Allen, the long-time Arkansas assistant coach and current director of high school and NFL relations. Early in his coaching career Allen stayed in Miles' condominium for a while as a graduate assistant when the two worked on Bill McCartney's staff at Colorado.

Mississippi State might be without top receiver De'Runnya Wilson for Saturday's 6 p.m. game at Reynolds Razorback Stadium. Wilson was carted off from Saturday's 31-6 loss to Alabama with a neck injury. Bulldogs Coach Dan Mullen said on Saturday he thought Wilson was going to be all right.

Wilson, who ranks fourth in the SEC with 66.4 receiving yards per game, collided with Alabama's Marlon Humphrey during an interception return, causing a hush to come over the Wade-Davis Stadium crowd as he was tended to by medical staff.

PLAYERS OF THE WEEK

• Reed kicked off Arkansas' big-play bonanza with a 52-yard touchdown on a catch and run, and he set up a field goal with his 40-yard kickoff return in the third quarter. Reed finished with 3 catches for 83 yards. Collins rushed for 141 yards and 2 touchdowns on 16 carries, including an 80-yard score.

• Wise, a junior from Carrolton, Texas, rampaged on the LSU offensive front, pushing, bull-rushing and swimming his way to 2 1/2 sacks on LSU quarterback Brandon Harris. Wise's career game also included a quarterback hurry and two pass breakups that were credited because Wise hit Harris as he released the ball, forcing incompletions.