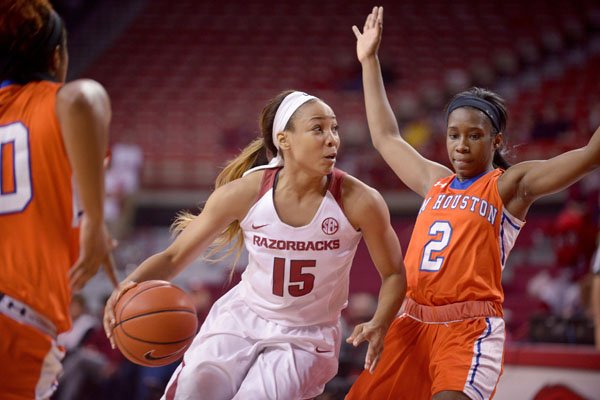 FAYETTEVILLE -- Defense and rebounding were big reasons the Arkansas women's basketball team was successful a year ago.

They were also keys in the Razorbacks' 67-47 victory over Sam Houston State on Sunday afternoon in front of an announced crowd of 1,071 at Bud Walton Arena.

The Razorbacks led 30-15 at the half after outscoring the Bearkats 12-3 to end the second quarter.

Dykes said he liked the way his team held Sam Houston State in check, but he said the Razorbacks committed too many fouls .

"I told them you have to be able to win ballgames with your defense all the time," Dykes said. "And especially when the ball's not going in for you. I thought we did that today. They've got some offensive weapons. They've got a kid that led their league in scoring last year, another young lady that averaged a double-double two years ago that's an all-league performer.

"What I didn't like about our half-court defense is we fouled too much. Twenty of their points came from the free-throw stripe because we're not disciplined enough to play defense at this level without putting our hands on people. So we've gotta get that cleaned up."

Jessica Jackson, a 6-3 junior, led Arkansas with 20 points and 13 rebounds. Kelsey Brooks had 10 points. Freshman Keiryn Swenson contributed 9 points and 6 rebounds in 16 minutes off the bench.

Arkansas outrebounded Sam Houston State 55-38 -- with 25 of the rebounds coming on the offensive end -- and it translated into 24 second-chance points for the Razorbacks.

Dykes said he was pleased with that aspect, particularly since Sam Houston State had rebounded well in a loss at Texas Christian on Friday.

"I like that they got only 11 offensive rebounds," Dykes said. "They had 25 against TCU out of the Big 12 on Friday."

Sam Houston State Coach Brenda Welch-Nichols said she could not explain why her Bearkats struggled so much on the boards against Arkansas.

"We just came off playing TCU and had 50 boards," Welch-Nichols said. "I just spoke to them in the locker room about that. There's no reason why we couldn't get those rebounds. We gave up way too many second attempts. We couldn't buy a bucket. This is the second straight bad shooting night, but we're still in growing pains. We start two freshmen and a fifth-year senior who has been out a year and a half."

Senior Shermise Robertson led all scorers with 21 points for the Bearkats.