Not first choice, Durham can score if needed 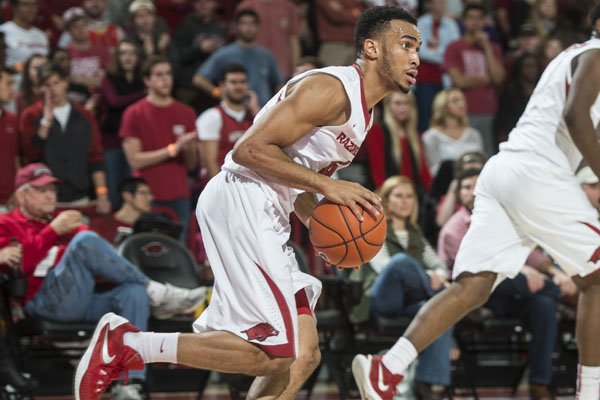 "Being a point guard, I just want to help my teammates," Durham said. "I feel an assist makes two people happy. It makes me happy and it makes the person who scores happy. So I would rather have two people happy than one."

Occasionally Durham violates his point guard's creed. For occasionally his teammates' happiness not only begins with their second-year junior college transfer senior point guard but completes with him, too.

Certainly it did in Arkansas' season-opening 86-68 victory over the Southern University Jaguars last Friday night at Walton Arena.

On the perimeter, Southern forced Arkansas' point guard to pass. Durham had taken only five shots total in the two exhibitions and was shooting an innocuous 2 for 5 against Southern.

"It was a big shot," Arkansas Coach Mike Anderson said. "It stopped their run and got us back to where we could get our defense set and ease away from Southern. For him that was a good confidence booster. I said, 'Hey, man do it again. Don't just do it one time."

Anderson doesn't want Durham too frequently firing away when other Hogs shoot with hot hands.

But the coach wants his point guard shooting well enough and often enough that defenses respect his shot and pay a price like Southern did if they don't.

"Hopefully he is going to be a guy that gets in there and distributes and finds the open guys," Anderson said. "And when people back off of him he has to be able to knock shots down."

Defensively, Durham continues "to be all over the place," Anderson said approvingly.

"Six turnovers," Durham said disgustedly. "That was a pretty sloppy game for a senior guard. I will get better at that."

He knows he must.

"As long as I run the team and we win the point guard battle, we have a nice chance of winning each game," Durham said.