Hogs pitcher working his way back from blood clot 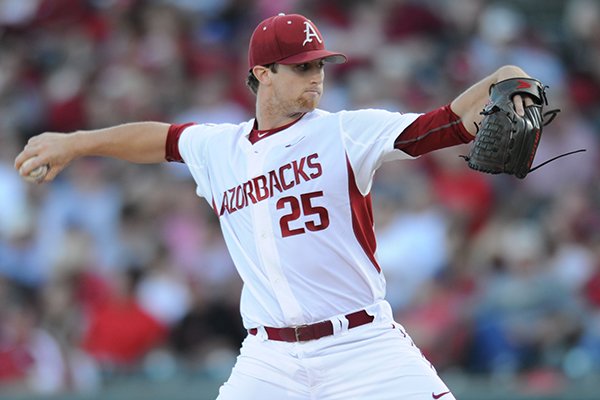 Dominic Taccolini of Arkansas delivers to the plate against Mississippi State during the fourth inning Saturday, April 25, 2015, at Baum Stadium in Fayetteville.

His right arm was sore, but it was a different kind of soreness than pitchers typically feel near the end of a long season.

He had pain in his armpit and above his shoulder blade. The pain was so intense that he couldn't lift his pitching arm, and eventually he was ruled out for the Razorbacks' games in the NCAA regional at Oklahoma State the next weekend.

Taccolini began to notice other changes prior to Arkansas' regional opener against Oral Roberts. His arm had become swollen and red, and small varicose veins were becoming visible. When the swelling didn't go down the next day, Arkansas trainer Corey Wood suggested Taccolini visit a local hospital to get an ultrasound.

It was there that doctors discovered a blood clot had formed from a condition called Thoracic Outlet Syndrome, a disorder that occurs when blood vessels or nerves are compressed between the collarbone and the first rib.

As the Razorbacks celebrated a comeback victory over Oklahoma State that Saturday night, Taccolini was in intensive care at an Oklahoma City hospital.

"My parents were there so they drove me to Oklahoma City," Taccolini said. "They were pretty worried, especially once we got to Oklahoma City and they had to do this procedure where they had to give me a chemical that breaks apart the clot. [The doctors] had to tell you the worst possible scenarios, so that kind of freaked them out a little bit."

Word of Taccolini's condition spread throughout the park in Stillwater as the Razorbacks clinched the regional championship with a victory over St. John's, although the severity wasn't disclosed publicly until this fall.

"It's not uncommon, but it's not like it happens all the time," Arkansas Coach Dave Van Horn said. "I'm just glad it turned out OK. Corey Wood, our trainer, did a good job of getting it figured out. It could have been serious."

Wood defers credit for figuring out the condition. He said team physician Al Gordon, strength coach Mike Strouhal and Oklahoma State's head football trainer and orthopedic surgeon were all involved in the decision to send Taccolini to the hospital.

"I had noticed he started having trouble with his arm the week before, so we were just kind of treating that and thought it was something else," Wood said. "His presented itself a little differently. His pain was in a different area than it is for most guys [with the condition]. That made it a little more difficult.

"We sent him to the hospital to rule out a blood clot, but it just so happened when he went there they did find a blood clot."

Taccolini returned to Fayetteville after three nights in the ICU. He was in the dugout when the Razorbacks beat Missouri State in a best-of-3 super regional series at Baum Stadium and at the College World Series the next week.

"Not playing and not pitching in Omaha was tough," Taccolini said. "It almost felt like I didn't go to Omaha."

Eleven days after the Razorbacks were eliminated, Wood drove Taccolini to Dallas for surgery. There they met Taccolini's parents, who had driven up from their home near Houston.

The surgery, performed by vascular surgeon Gregory Pearl, removed part of Taccolini's first rib -- it was about the size of a chicken wing, Taccolini said -- to decompress the area that had caused the blood clot. Wood stayed in Dallas three days to be with Taccolini and his family and to learn more about the rehabilitation process.

Taccolini spent about six weeks rehabbing before returning to Fayetteville.

"They said that was common for throwers like javelin throwers and pitchers because of that repetitive motion," Taccolini said. "If you put your arm above your head, it restricts blood flow."

Taccolini also missed his assignment at the Cape Cod summer league in Massachusetts because of the injury and wasn't able to pitch off the mound until Sept. 28, his 21st birthday.

Taccolini, a junior, estimates he is only pitching to about 50 percent of his full velocity and should be fully cleared by Dec. 16. Arkansas coaches expect Taccolini to compete for a starting weekend job after recording a 4.32 ERA in 17 appearances last season.

"I expect to be back where I was," Taccolini said. "I don't think there will be a drop-off. Even throwing now my accuracy is about the same. It's been kind of surprising how it's come back. I feel like my arm is a lot looser. Supposedly with the surgery they say you may be able to throw a little harder."

Taccolini is one of three frontline pitchers for the Razorbacks who have had to overcome injuries during the off-season. Junior James Teague (elbow) is 100 percent after missing the College World Series, but sophomore Keaton McKinney (hip surgery) may not return until after the start of the regular season.

"If we get all these pitchers back healthy, we're going to have a deep pitching staff," Van Horn said.

After his scare earlier this year, Taccolini is just happy to be back around the game he loves.

"Baseball is part of my life," Taccolini said. "Not having it for a long time and not being able to do anything physical was hard for me."