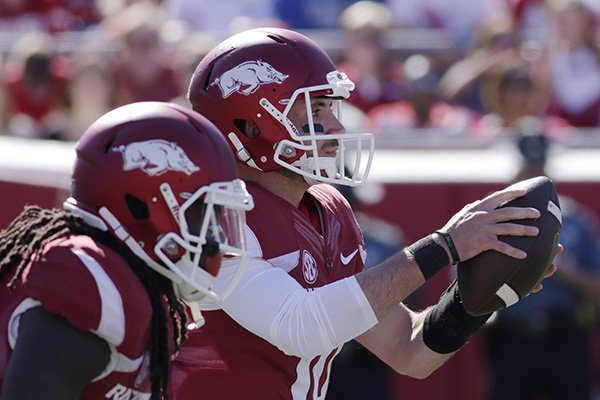 Arkansas ranks No. 120 in red zone success, converting 9 of 14 drives (64.3 percent) into scores. The Razorbacks are No. 121 in touchdown percentage inside their opponents' 20-yard line at 35.7 percent.

The struggles in the fourth quarter have been especially magnified in closes losses, which are reminiscent of last season, when Arkansas had trouble scoring and closing out SEC games.

"It's tough to say one half to another, but the execution just isn't there in the second half," quarterback Brandon Allen said."We're done a lot to improve this week. We're working on it.

Arkansas scored on its first two red zone possessions against Texas Tech. Four consecutive Alex Collins runs from the 21 ended with his 1-yard scoring run in the first quarter. Then Allen flipped a 7-yard bootleg pass to Hunter Henry for a touchdown after the Razorbacks had a first-and-goal from the Red Raiders' 8.

Allen's 10-yard screen pass to Rawleigh Williams in the third quarter set up third and 3 from the Texas Tech 4, but the Red Raiders stopped Williams on a running play and forced a field goal.

Trailing 35-24, Arkansas drove 70 yards to the Texas Tech 5 and appeared to score on Allen's 5-yard throw to Hunter Henry, but the play was wiped out by offensive pass interference. Allen's third-and-17 pass for Sprinkle at the goal line fell well short on the next play.

"He was coming open and I was trying to time it out to where I was letting it go before he was ready for the ball," Allen said. "I probably could have waited one more tick there at the end to let him get open even more."

Junior cornerback DJ Dean is likely to take over the lead punt return duties held by the injured Jared Cornelius. Dean held the job early last season and had a 63-yard return to the Nicholls State 2 early in the season before being replaced by Cornelius.

Receivers coach Michael Smith said junior Drew Morgan has taken an on-field leadership role with the unit with senior Keon Hatcher out for a minimum of six weeks.

Hatcher, the veteran and leader of the receiving corps, suffered a broken foot, as did Cody Hollister last week, while sophomore Jared Cornelius went out last week with a double fracture in his left arm. Junior kickoff returner Eric Hawkins missed last week after being carted off the field late in the Hogs' 16-12 loss to Toledo.

"In my eyes it's not the shoes that I'm filling, it's the shoes that I'm making," Morgan said. "As long as I can make my own shoes and go from there for the six to eight weeks Keon's out, then I can prove that this wide receiver corps still has it."

The University of Arkansas is one of 24 self-supporting athletic departments in the NCAA, according to a report on the revenues and expenses for NCAA members in 2014.

Razorbacks athletics reported revenue of nearly $96.8 million and expenses of $94.7 million for the annual report. The athletic department does not receive funding from tuition, student fees or other state appropriated support and transfers more than $2.25 million back to the university.

The athletic program allocated $18 million in revenue to help build Champions Hall, the first new classroom building at UA since 2007.

Bret Bielema turned his dissatisfaction over an offensive pass interference call made by the Big 12 officiating crew last week in a different direction.

"Good news too," he said. "We jump into SEC play this week and we've got SEC officials. Since I've been here that's probably been one of the nicest benefits of being in this conference. Having been around this thing, they've got the best officials in the business."

There was some initial reluctance on ESPN's part, Long said, because of the lost advertising revenue.

"I think they were kind of hesitant at first, but then they did listen," Long said. "They understood ... but they did say that it would impact revenue for us. We were willing to take that impact because we didn't want it on the SEC Network."