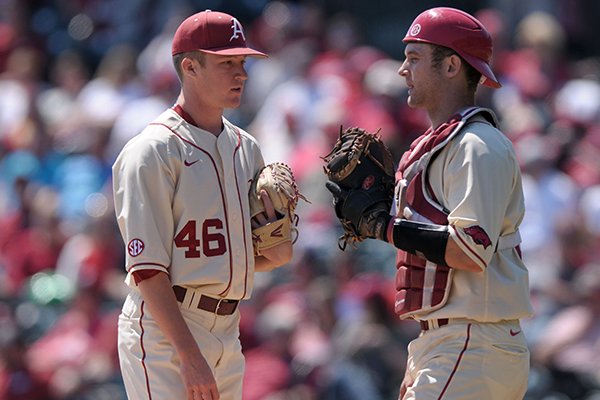 Arkansas pitcher Barrett Loseke (46) talks with catcher Tucker Pennell during a game against Missouri on Sunday, April 3, 2016, at Baum Stadium in Fayetteville.

Van Horn indicated he may change his starting pitchers on Friday and Saturday. The Razorbacks' three starters combined to pitch eight innings in the team's series loss to Missouri at Baum Stadium.

"Every now and then you are going to have a game where the starter doesn't do well, but it's tough when four out of our last six or seven games the starters have really struggled and we are in that bullpen," Van Horn said. "We are going to wear them down and we can't continue to do that.

Neither Jackson nor Teague have started a game this season. Jackson pitched four innings Sunday and threw a season-high 87 pitches.

"We tried to stretch Jackson out a little bit today, get him up there with his pitch count just in case we decide to start him on the weekend," Van Horn said. "There is a possibility we could start Teague, might go with Loseke again."

Starting pitching has been problematic for Arkansas since SEC play began three weeks ago.

Taccolini was strong in Arkansas' first month of the season, winning three of his first four starts. But he allowed eight runs in the first two innings of the Razorbacks' conference opener against South Carolina and hasn't pitched past the third inning in either of his last two starts.

He has allowed 12 earned runs in nine combined innings against SEC competition.

"Once you kind of get in your head, it might hurt you a little bit," Jackson said of Taccolini. "You might start thinking about it more than you usually do.

"I think every pitcher goes through it. It's just like a hitter's slump. He'll find it again."

The Razorbacks' bullpen has been on the hill for 44 2/3 of 78 innings in conference play.

"Obviously it's the biggest concern right now," Van Horn said. "...It would be nice to have a starter that could go seven (innings) one day and really save the bullpen, and give us a chance to win that game."