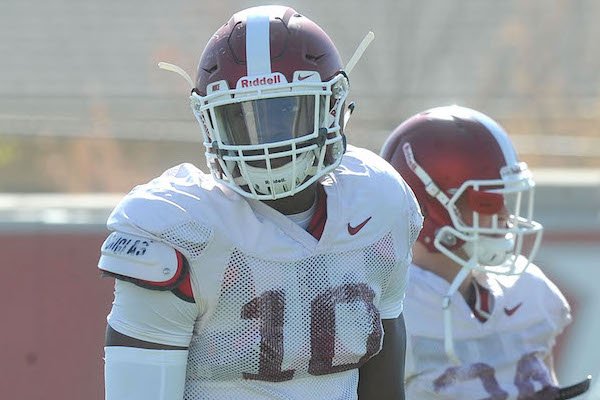 FAYETTEVILLE — Deatrich Wise touched on a few of the attributes that could make Randy Ramsey’s trial run at defensive end a success, but then Arkansas’ junior All-SEC defensive end found himself at a loss for words.

“He’s very…,” Wise began, before trailing off and spending the next few moments trying to think of the adjective eluding him. He couldn’t, so he apologized to a reporter.

“You’re good,” was the response back.

“He’s great,” Wise said of Ramsey, before busting out laughing.

Arkansas would be thrilled if Ramsey was either one of those at his new position.

The 6-foot-4, 228-pound sophomore was good enough to get on the field as a true freshman at linebacker, but was suspended the following spring and left the program after he was forced to sit out last season for academic reasons. The odds of him putting on a Razorback uniform again appeared slim at best, but he returned this spring semester, paying his own way and earning his spot back with the program.

While he could wind up back at strongside linebacker eventually, he’s working at defensive end to begin fall camp, hoping to provide the Razorbacks with some burst on the edge as a rush end.

“He’ll bring a lot of speed to our D-Line,” Wise said. “We already have speed, but he’s real fast. He also knows the coverages better than anybody on the D-Line because he was a linebacker. He knows the terminology. If there’s things we need help with, whether it’s coverage plays or something like that, he’ll talk to us.

“So it’s like the mind of a linebacker in the body of a D-Lineman.”

With Tevin Beanum’s status up in the air after what Bret Bielema termed “a slight setback” last month, the Ramsey experiment at defensive end suddenly takes on new importance while the thought process behind the move becomes clearer. Ramsey was on the short list of players Bielema pinpointed to pick up the slack along with heralded freshman McTelvin Agim and Karl Roesler. Wise and Jeremiah Ledbetter to slide over to the spot as needed.

So not only is Ramsey back and in good graces, he finds himself a viable option at two of the biggest question marks on defense — strongside linebacker and defensive end opposite Wise. If the absence of Beanum, a projected starter, is long term, it’s a blow to a defensive line unit that should be among the best in the SEC, led by Wise and Ledbetter.

But both players are high on Ramsey and what he brings to the table at his new position.

“He can bring a lot of experience and just his overall athletic ability to get to the quarterback,” Ledbetter said. “He’s long, lanky, a tall guy, a lot of speed, so he’s a big asset to the position.”