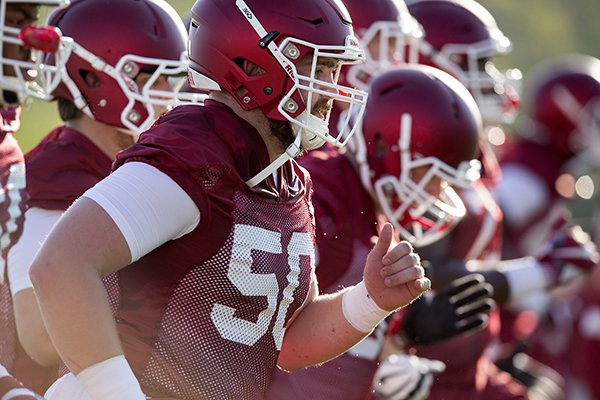 FAYETTEVILLE -- The Arkansas coaching staff is serious about making sure their best five offensive linemen are in place for the season opener on Sept. 3 against Louisiana Tech.

The unit has undergone shuffling through the early portion of training camp with an emphasis on right guard.

Jake Raulerson, a 6-4, 301-pound graduate transfer from Texas, worked with the starters at right guard on Saturday. Zach Rogers, who held the spot on the first day of camp, worked at backup center to continue his cross training.

"I figure by September 3rd we've got to have someone there, right?" Skipper said. "Someone's going to take the field."

"It's another opportunity for guys to compete," he said. "There's been great competition across the room.

"We had a great day today working with three or four different guys in there. All of them are playing well and we're just trying to find the best five."

Brian Wallace, who was first-team right guard early in the spring before suffering a couple of injuries, was running at second-team right tackle Saturday. He joined left tackle Paul Ramirez, left guard Deion Malone, Rogers and Merrick at right guard on the second unit during the open viewing period.

Tailback Kody Walker, who missed the last few spring practices after breaking a bone in his right foot, said he's at full speed.

Walker, a sixth-year senior, has been practicing with the starters.

Walker received an extra year of eligibility because of frequent injuries. He said he's not limited in any drills, but Coach Bret Bielema is making sure to take care of him.

Josh Williams moved up to the first-unit base defense at strong-side linebacker, alongside senior Brooks Ellis and sophomore Dre Greenlaw on Saturday. Williams, a senior, is coming back from a severe broken leg suffered in a Week 5 victory at Tennessee last year.

The second group of linebackers consisted of sophomore Kendrick Jackson in the middle, junior Dwayne Eugene on the weak side and junior Khalia Hackett on the strong side.

Freshman quarterback Cole Kelley cuts a striking figure at 6-7, 258 pounds, making him the same height as Ryan Mallett, the Hogs' starter at quarterback in 2009-2010.

"That's a big boy right there, 6-7, 260," junior quarterback Austin Allen said. "You know the first day out there he's wearing No. 15 and Coach [Dan] Enos called him Ryan Mallett and he's never even coached Ryan Mallett. He's got that type of body and that type of arm. Once he learns it all and everything he could be pretty special."

Allen and Kelley shared a chest bump during the early portion of Saturday's practice.

"I don't even think I got to his shoulder pads," Allen said.

Placekicker Cole Hedlund hit 4 of 4 field goal attempts during the open portion of Saturday's practice with a long of 48 yards.

The Razorbacks have announced that their first scrimmage of camp Saturday at Reynolds Razorback Stadium will be open to the media in its entirety. There has not yet been an announcement regarding fan access in training camp.

Tickets returned to Arkansas from Alabama and LSU for those games in Fayetteville will go on sale this week.

There are less than 900 tickets available for Alabama on Oct. 8 and about 3,000 for LSU on Nov. 12, according to the UA. The $65 tickets will be sold exclusively to Razorback Foundation members Monday and season-ticket holders Tuesday. Any remaining tickets will be sold to the public Thursday.

Foundation members and season-ticket holders must log into their accounts on ArkansasRazorbacks.com to buy the tickets on a priority basis.

Visiting SEC teams receive an allotment of 6,000 tickets for games at Arkansas.

The Razorbacks returned to the outdoor fields Saturday after working indoors for practice No. 2 on Friday when lightning in the area forced the move indoors to the Walker Pavilion.

The Razorbacks will conduct their annual media day today, with Bret Bielema updating the media on Arkansas' first three days of practice. It is the only day during the season in which all coaches and players are available for interviews.