6 true freshmen who may play 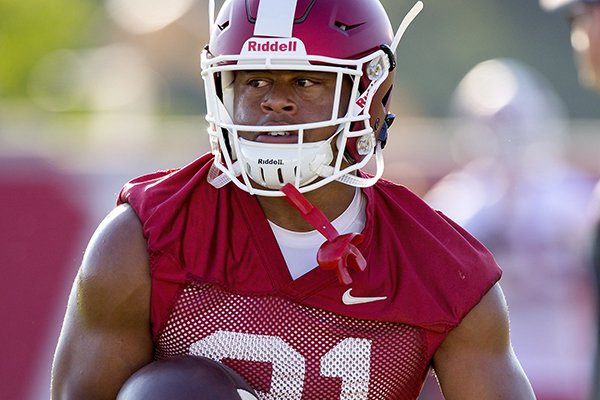 Smith — “Sosa, if you can still lump him into that (true freshman) category, has certainly done good things.”

Enos — “(They're) really talented, just behind schematically on protections and things like that. But with the ball in their hands, they're both very, very good players.”

Bielema — “De'Jon is playing mike linebacker but we've rolled him in there in sub packages as well, just because as a former quarterback he's got a good sense of the ball, awareness.”

Bielema — “He's going to play and he's going to play well. For a guy that's played a lot of D-Line, he catches the ball well in the flat and does a lot of nice things with the ball in his hands. In addition, yesterday we ran quite a few series of inside drill and he just got after people, our No. 1 defense, pretty good. So I'm very impressed with him.”

Enos — “He's been really good. He's really fast, really explosive. He's got good ball skills. Things come naturally to him. He's a very instinctive player for a freshman receiver, really understands how to throttle in zones and how to run away from man. And then you take the speed that he has and the acceleration and it puts him into another category. He's going to be a very good player.”