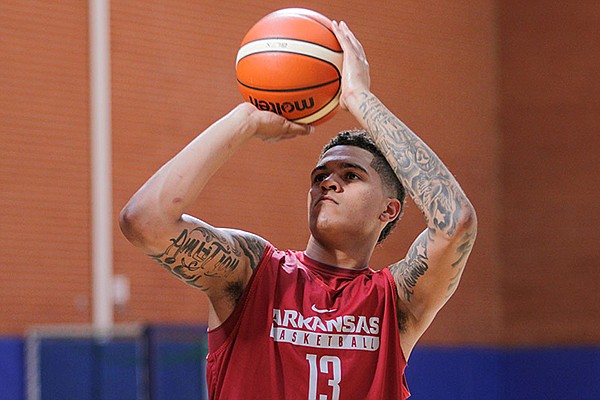 Dustin Thomas shoots the ball during an exhibition game in Spain.

ALBACETE, Spain - Arkansas' second exhibition game in Spain got off to a much better start than its first, and the outcome was more to team's liking, too.

"I thought we put a group out there with great energy and established defensively how we want to play," Arkansas coach Mike Anderson said. "I thought on the offensive end we got some easy buckets but we also did a better job of getting a higher percentage shot."

Freshman C.J. Jones starred for the Razorbacks, scoring an exhibition-high 18 points. Jones made 6 of 9 field goal attempts, including three 3-pointers.

"On fast breaks, I was going to the other corner and getting spotted up. (Anton Beard) found me a lot of times so it really worked out."

Jones had 2 rebounds, an assist and a steal in 12 minutes.

"I thought you saw a lot out of him," Anderson said. "You saw some inklings in the last game, but I thought he was playing with a lot of confidence. He's a guy that can knock down shots. What I like even more out of him is that he rebounds, whether it's on the defensive boards or the offensive boards."

Dusty Hannahs added 14 points on 6 of 14 shooting for Arkansas. After fouling out Tuesday, Moses Kingsley added 8 points and 6 rebounds in 24 minutes.

"We definitely (took yesterday personal)," Hannahs said. "Adversity struck yesterday and I thought we battled through it pretty well. Not getting the win made it really difficult. We didn't sleep too well last night, so I'm glad we could come take out our anger on this team."

The Razorbacks missed their first nine shots in a loss to Eurocolegio Casvi on Tuesday, but Arkansas made 44 percent of its field goal attempts Wednesday to jump to a 50-29 halftime lead. The Razorbacks arrived at the gym less than an hour before tip-off, which was delayed 30 minutes because of traffic and road construction between Madrid and Albacete.

Arkansas began the second half on a 6-0 run after a dunk and layup by Kingsley, and a layup by Dustin Thomas. Albacete pulled within 66-44 late in the third quarter, but the Razorbacks closed the period on a 7-0 run that was capped by dunks from Jones and Adrio Bailey.

Bailey had two more layups to open the fourth quarter and six different players scored during a 14-0 run late in the game. Every Arkansas player scored and 12 of 13 Razorbacks played at least 10 minutes.

Arkansas also stepped up its defense, limiting Albacete to 36 percent shooting and scoring 31 points off 25 turnovers. The Razorbacks cut down on their personal fouls, from 43 to 26.

Albacete failed to make Arkansas pay when it did foul and made only 13 of 30 free throw attempts.

"We kept them off the glass and kept them off the free throw line...and cut down on some of the turnovers," Anderson said. "We did a better job defensively in the half-court and I thought our guys came off the bench and gave us some quality minutes.

"It was a much better performance, but we can play better."

Arkansas will now travel to Barcelona for the final leg of its exhibition tour. The Razorbacks are scheduled to play Barcelona Region All-Stars on Saturday at 2 p.m., Central, and European Basketball Academy on Sunday at 1 p.m., Central.