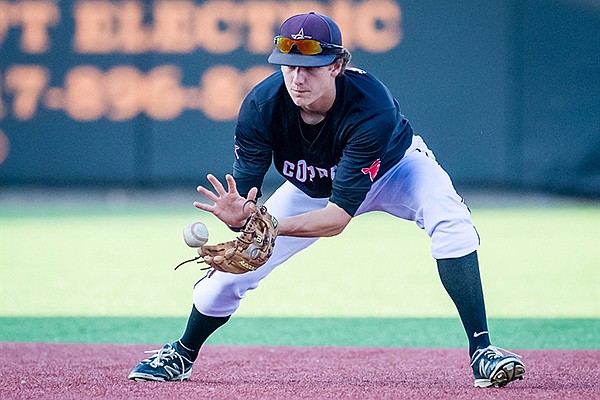 Jacob Nesbit is committed to play for Arkansas in the class of 2017.

FAYETTEVILLE — Jacob Nesbit had a surprise awaiting him when he returned to his home in Coppell, Texas, earlier this week.

Nesbit, a shortstop committed to Arkansas in the class of 2017, had gone with his parents to help his older sister move into her dorm in Kansas. At his home was an envelope from Indiana.

Inside the envelope was an offer letter to play football for the Hoosiers.

Most surprising about the offer was the fact that Nesbit hasn't played football in nearly two years. He quit the team to focus on baseball following the 2014 season.

"I still get football camp invites because I was listed on the roster at one point, so I just expected it to be that," Nesbit said. "I opened it and my parents were very surprised and shocked, as was I because I hadn't thought about football, really.

"I think it might have been just a freak thing. But yeah, it was surprising."

Arkansas fans shouldn't sweat the football offer. The former wide receiver said the only helmet he plans to wear again is one in the batter's box.

"I was pretty good at football, but baseball is definitely my calling, my first love," Nesbit said. "When the Razorbacks came knocking, I jumped on that. I want to progress and be the best baseball player I can be heading into my first year in college."

Arkansas was the only school to offer Nesbit, although Baylor, Air Force and Navy also recruited him. He committed to the Razorbacks quickly and plans to sign a letter of intent in November.

"I grew up watching them on TV," Nesbit said. "Then I went up there when my sister (now at Kansas State) visited and there's nothing like the facilities, atmosphere at games, fan base - all that is incredible and it's something I couldn't pass up."

Nesbit is a steal for the Razorbacks, said Kendall Clark, his high school coach. As a junior, he batted .294 with 21 RBI. As a sophomore, Nesbit batted .354 and was 16-for-16 stealing bases.

More telling, Clark said, were Nesbit's stats in pressure situations. He batted .344 with runners in scoring position and had 7 RBI with two outs. His fielding percentage was .967.

"He hits for power and is a good doubles and triples guy," Clark said. "He can hit the ball out of the yard. He runs the bases aggressively and is good.

"I've got a complete player. He can do it all."

Nesbit doesn't figure to be a high draft risk and said that pro baseball isn't really on his radar. He is a good student, boasting a 4.76 weighted grade point average.

"At this point, I just really want to get an education and experience college because I think it's a really important time in your life," Nesbit said. "That's where I want to be and that's what my mind is set on right now."