Hogs hope to have offensive line set by week's end 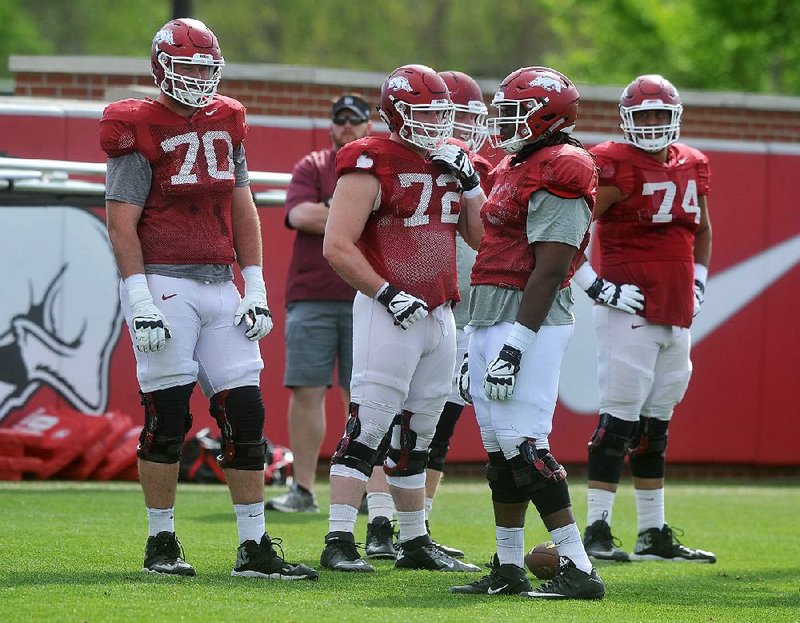 With the move, Jake Raulerson slid from the first-team right tackle slot to right guard, replacing redshirt freshman Jalen Merrick in the latest of a litany of changes to the depth chart on the right side of the offensive line.

There is an end in sight, potentially, to the constant experimentation with different personnel groupings as the Sept. 3 season opener against Louisiana Tech approaches.

“We’re taking a day to look at certain guys. … I want to get to a point probably by next Tuesday, maybe 10 days out from our game, where we feel good about where we’re at with the top five and go and let the other guys serve as the second unit or sub in, in certain packages,” coach Bret Bielema said.

Jalen Merrick was back with the twos after working with the first-team offense at right guard the first three practices this week.

For Jackson, the move is another chance to earn a spot with the first-team line, an opportunity that — even if it’s just a cursory look — didn’t seem very likely when Skipper flipped from right tackle to replace him after a week of fall camp. Jackson had worked with the ones the entire spring and into fall camp, but consistently struggled leading up to Skipper’s move.

Raulerson has rotated between center, guard and tackle throughout fall camp, but has been a part of the starting line for the last week-plus and appears to be a good bet to be among the starting five even with all the moving parts.

“I think at the end of the day, this’ll make us better,” offensive coordinator Dan Enos said. “As you go through every season, usually there’s mixing and matching that goes on. It’s good for guys to know multiple positions and guys being comfortable, having played and practiced on the right or the left side in case they’re called on.”

Zach Rogers is working at backup center behind Frank Ragnow a week after repping with the ones at right guard. Rogers and Raulerson are both capable of backing up Ragnow, but their practice on the right side of the line had required sophomore walk-on Jackson Hannah to work with the twos there in Saturday’s scrimmage despite him not being a player who figures into the two-deep.

“You guys don’t want to write about the No. 2 center, but you worry about it, because he’s got to get it to your No. 2 quarterback,” Bielema said after fielding a few backup QB questions. “That process has been good.”

It wouldn’t be a huge surprise if Rogers winds up as a starter at right guard as Arkansas gets into the season, given the Razorbacks’ best line so far in fall camp was arguably the one that featured him and Raulerson on the right side in Saturday’s scrimmage.

Then again, not much will be a surprise at this point.