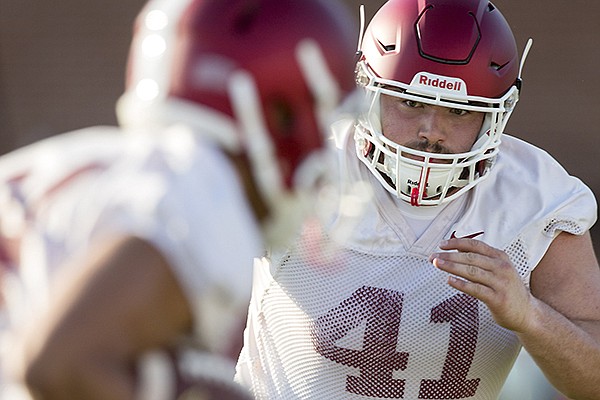 FAYETTEVILLE — There is a lot to like about Arkansas' freshman football class.

There are headliners like defensive end McTelvin “Sosa” Agim, running back Devwah Whaley and wide receiver Jordan Jones. The speed and athletic ability of those three were easy to spot early in fall camp.

I've wondered all along when Austin Capps was going to step up with those flash and dash guys. Well, it happened this week.

The Star City nose tackle is now solidly in the picture for playing time after dazzling once the heavy hitting began in the last four days. There was a big moment in Monday's practice when Bielema realized there would be no redshirt for Capps.

The 6-4, 309-pound Capps was a four-star recruit almost by his sophomore year in high school, the point most started to realize he sported a man's beard. His amazing strength was apparent from the first day he stepped on campus in June.

“He's just so strong,” Bielema said. “And he has amazing hands - strong, strong. He was such a great baseball player and I think those hands come from that, all that time swinging a bat and throwing. But he has serious hands.”

There was a pass rush situation Monday when Capps shoved a double-team block from center Frank Ragnow and left guard Hjalte Froholdt back into the lap of quarterback Austin Allen.

Capps has played so well in the last week that backup nose tackle Bijhon Jackson was moved to defensive tackle, also known as the 3-technique spot played by Jeremiah Ledbetter.

“We just decided we'd move Austin up,” Bielema said. “Bijhon can play that 3-technique. Plus, Armon Watts (at third nose tackle) is slowed a little by a health issue we need to watch. But Austin is going to play because he's just so strong.

“You know there are times when you really worry when you look and see all of these seniors in the defensive line. Taiwan Johnson is a senior there at the tilted nose tackle. You start thinking about next year, but it looks pretty good for next year with a player like Austin.”

Bielema raved about Capps in a conversation before practice Tuesday.

“I just like him a lot,” he said. “We worried about him a little when he first got here in the summer. He was homesick. But he got through that. We had to watch him a little. But he's really come on and he looks like he's going to help us a lot and quicker than I thought.”

Bielema continues to congratulate Star City for its favorite son. He won't soon forget a meal in the Capps home the night he made a visit just before signing day.

“I have never been through anything like that,” Bielema said. “It was a dinner in the home and they said there would be guests. Before it was done, I think everyone in Star City had been through there and had dinner with us. It could have been 400.

“I thought it was neat because they all had something to say about Austin. It's clear that they all had a part in raising him, teaching him or coaching him. The entire town loves him."

Bielema said the trip reminded him of a famous quote.

“You hear that line about it takes a village," Bielema said. "I can tell you that with Austin Capps, the entire town of Star City is that village and they raised him. They did a wonderful job.”

I got tickled when Bielema said Allen has gotten better this week. Yes, when the work is live and a freshman like Capps is challenging the offense, you must improve.

There are lots of highlights. Damon “Duwop” Mitchell is developing as a reliable option at running back. He had two highlight reel runs in practice Wednesday morning. That part has never been an issue as far as Bielema is concerned. It's all the other things that come with playing running back that must be conquered.

“It's the same for Duwop as for Devwah (Whaley),” Bielema said. “Duwop is like a freshman because he's learning the blitz pickup and protections. That's where he's coming along and what he has to show us.”

Austin Capps is still learning all of the scheme, too. But he doesn't have to learn to be strong. He's one freshman who came in looking and playing like a real man. Ask Ragnow and Froholdt.