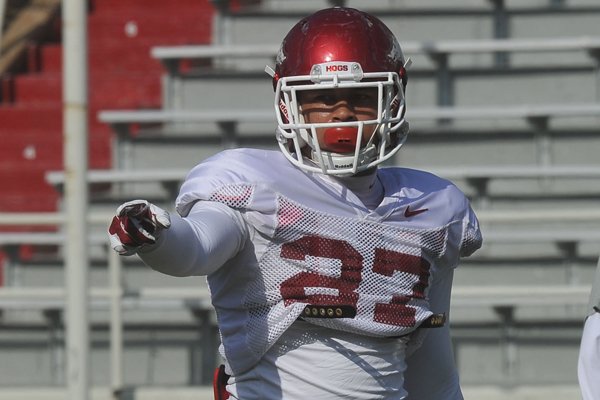 FAYETTEVILLE — Junior Khalia Hackett has supplanted Josh Williams as Arkansas’ first-team strongside linebacker this week, but playing time at the position is still very much up for grabs.

Even with middle linebacker De’Jon "Scoota" Harris’ impressive fall camp at mike linebacker don’t expect to see him in the mix for the starting job at Sam. He’s of more use backing up senior starter Brooks Ellis at Mike.

“The reality is, we’re not going to be in base a whole lot,” linebackers coach Vernon Hargreaves said. “We’re probably going to be in nickel and Cash a lot more than we are in base, so this gives him an opportunity to get on the field.”

Harris appears to be earmarked as the successor to Ellis at middle linebacker. He worked some at Will in a developmental session last week, but the coaching staff has told him they want him in the middle so he and sophomore Dre Greenlaw can be a tandem moving forward.

In the meantime, he can spell Ellis this fall, a luxury the Fayetteville native didn’t have last year.

“We know he’s a good athlete,” Hargreaves said. “He’s still trying to figure this whole thing out just playing there all the time and being able to be fast and quick and read everything. That’s the only thing we’re lacking right now is just having that suddenness, but I think he’ll get more comfortable moving forward.”

At Sam, Williams being in a position to compete for the job after suffering a nasty broken leg that threatened whether or not he would keep the limb is commendable, a contribution the coaching staff wasn’t counting on having. But he was leapfrogged by Hackett, who was up-and-down last year, after Saturday’s scrimmage.

“He had a pretty good scrimmage last week and did a nice job out there,” Hargreaves said of Hackett. “I’m splitting those guys a little bit, with a lean a little bit more toward Khalia right now.”