State of the Hogs: Batman Joins the Fight Against the Spread 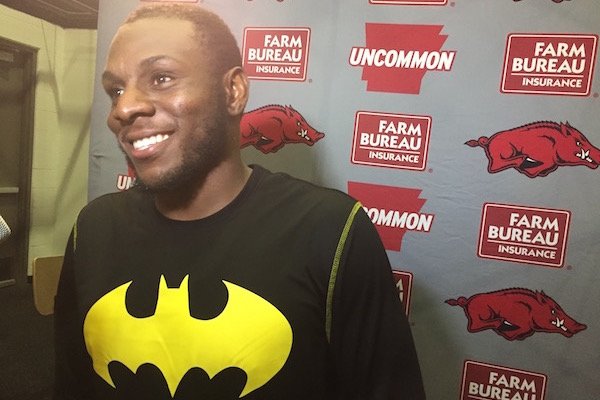 FAYETTEVILLE — Ryan Pulley's coming out party was near the end of the Liberty Bowl when he stepped in front of a pass for his first career interception.

But the real Ryan Pulley didn't emerge until a grand entrance at Tuesday night's interview sessions for the defensive unit. It was the coming out party for Batman.

There has been another Batman at Arkansas. Ahmad “Batman” Carroll played for the Hogs in 2001-2003 before a brief fling in the NFL.

This Batman is a little different. Carroll never entered the media room in full Batman dress as Pulley did Tuesday night. The Fort Myers, Fla., product had on a long sleeved black shirt with the yellow Batman logo. Apparently, it's one of many shirts in his wardrobe.

Pulley wants to be Batman for the Arkansas defense, a gifted cornerback with super hero powers to handle all situations. He said he wants turnovers to be his specialty.

“There is a lot more from where (the Liberty Bowl interception) came from,” he said. “It was a big play.”

Pulley is part of a four-man rotation that defensive coordinator Robb Smith thinks can rotate at cornerback, allowing for lots of variety in the nickel and dime packages. Pulley has emerged as a solid option for playing time.

“We really think we have four corners, three safeties,” he said. “We can play five or six defensive backs out of those against some spread teams.”

“Batman is my favorite Super Hero,” he said. “He doesn't have any special powers. He can't fly. He doesn't do anything that a regular person can do, but he knows how to fight. And, he has a cool car. That's how I want to be for our defense.”

Pulley said he lacks the cool car. But he said he can tackle. He's as physical as they come. That equates to Batman's fighting skills.

There is plenty of kidding from teammates, especially safety De'Andre Coley. Another Florida product, Coley said he's not fond of the reference from Pulley that “he's my Robin.”

“I'm tight with Pulley,” he said. “I am. But I'm not Robin. I will say that Pulley is different. He's crazy about Batman. He has all that stuff. I saw him in his Batman pajamas. I said that's taking it too far.”

Pulley said there has to be a Robin for every Batman.

“You gotta have one,” he said. “We do hang out together. So he's my Robin. We go together.”

Coley said that's not his deal.

“The guys call me Ed Reed,” Coley said. “I'm good with that. Not Robin. I will say that I'm about sticking with Pulley. I'm like his big brother. But man, he does have a bunch of Batman stuff. We give him a hard time. He's NOT Batman, but he thinks he is.”

Pulley said he's been into Batman stuff for about four years.

“I wasn't about that growing up,” he said. “About four years, my mom gave me a Batman shirt. I loved it. So I just kept getting more. I'm into it now. I watch all of the movies. I've seen them all. I loved the new one this summer.”

There is some new about the Arkansas secondary. Coley said they are built for action. He points to a slimmed look to a lot of the defense.

There are others into the smaller is better theme. Linebacker Khalia Hackett, cross trained at all three spots, has lost from 240 to 225.

“I can move now,” Hackett said. “I was 225 today before practice and that's my weight.”

There is method to the weight loss.

“It's about playing against the spread teams,” Hackett said. “We have to be able to handle the tempo teams. Everyone had to make an adjustment. It's what we struggled against last year.”

Smith didn't want to give away the wrinkles, but said it's more than just lighter in some positions.

“We have some things that I don't want to talk about,” he said. “But we looked at the things that gave us problems. I will say that in pass situations, we are going with four pass rushers. We are going to get our best guys for pressure on the field.”

For instance, there could be situations where the Hogs go with a front four of Deatrich Wise, Jeremiah Ledbetter, McTelvin “Sosa” Agim and Randy Ramsey.

“We've got a niche for Sosa,” Smith said. “We have more ability to change personnel. We have more linebackers. When we are going with two inside linebackers, it could be Brooks Ellis, Dre Greenlaw, Scotta Harris, Khalia Hackett and Dwayne Eugene. We've got numbers at corner and safety.”

Plus, the Arkansas defense now has Batman.