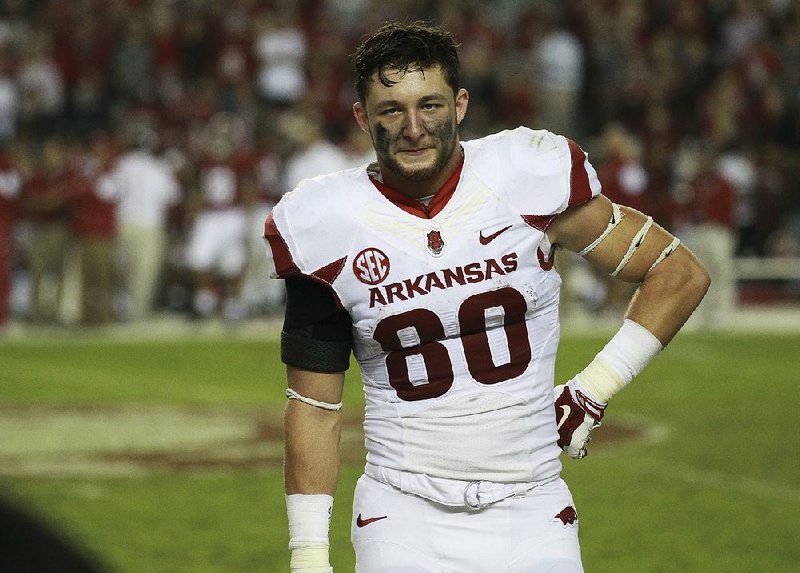 FAYETTEVILLE — Drew Morgan stood up and confessed he had an addiction during a recent team meeting.

Teammates and coaches were silent, unsure of what was going to follow.

“Their eyes widened up,” Morgan said.

“Everybody was like, ‘What’s going on here,’” junior center Frank Ragnow said. “But then he said, ‘I have the juice.’”

That broke the momentarily stunned silence as his teammates started laughing. It wasn’t the first time they’d heard the declaration.

“Drew Morgan always yells juice,” Ragnow said. “We’re like, ‘Oh, gosh, where is this going?’ But it was actually a pretty dang good speech.’”

Morgan went on to go in-depth with what he meant by juice — and why he wanted the rest of the team to have it.

“The addiction is a positive mental mindset,” Morgan said. “I come in every day with a positive attitude. It’s a term I call juice. And now everybody is infected with juice.”

Morgan went from being the only player yelling juice to the word becoming a team rallying cry of sorts, something every player now yells as they take the practice field.

“I don’t know if they’re all just yelling it at him, because he’s kind of a weirdo,” Ragnow said. “But yeah, we’re all yelling juice.”

Someone who has “the juice” has the "it" factor and are excelling in whatever their field is. It's become a commonly used term over the course of the last few years. Morgan wanted to define it.

“You see all these NFL guys say, ‘I’ve got the juice,’” Morgan said. “Well, no one really defines juice, so I dug deep one night and just thought in my bed, maybe I should come up with a definition of juice. So the definition of juice is a positive mental mindset.

The explanation prompted some smiles from writers.

He’s convinced his teammates to adopt the new motto.

"He's always going 100 miles an hour," quarterback Austin Allen said. "He brings the juice for us every day. If something's not going good, he's the guy that pumps us up."