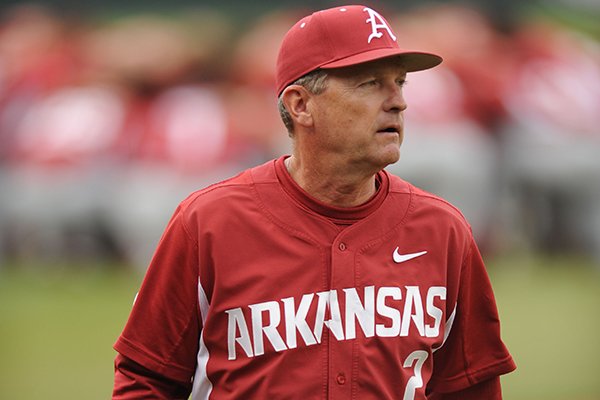 Arkansas coach Dave Van Horn walks back to the dugout against Gonzaga Wednesday, March 9, 2016, before the start of the game at Baum Stadium in Fayetteville.

FAYETTEVILLE — Arkansas' opponents and game times have been set for the 2017 Frisco College Baseball Classic.

The Razorbacks are scheduled to play Arizona at 4 p.m. on March 3; Nebraska at 7:30 p.m. on March 4; and Oklahoma State at 3:30 p.m. on March 5. All games will be played at Dr. Pepper Ballpark in Frisco, Texas - the double-A home of the Texas Rangers.

A couple other Arkansas baseball series dates announced today: home vs. LSU on April 7-9; at Auburn on April 21-23. @hognationnet

The Razorbacks are scheduled to play Nebraska for the first time in four years. Arkansas coach Dave Van Horn coached the Cornhuskers from 1998-2002 and twice took the team to the College World Series.