State of the Hogs: The real story of Brandon Burlsworth's first year 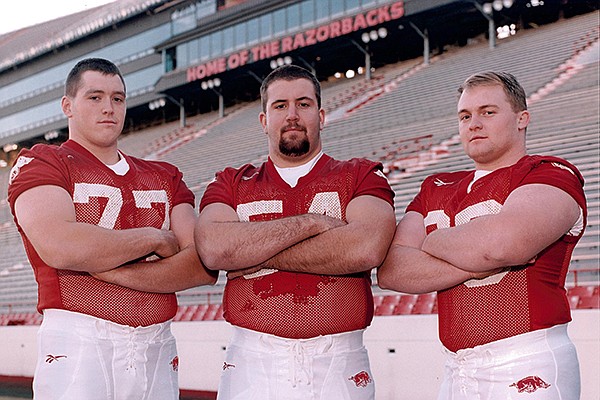 From left to right, Brandon Burlsworth, Grant Garrett and Russ Brown pose for a picture in 1997.

FAYETTEVILLE — There is a great comfort level that Hollywood came close enough on Brandon Burslworth's story in the movie Greater. Script writers are always going to take some liberties. I have no issue with that.

I did chuckle when I got a release from a public relations man in Los Angeles touting the movie with a bad fact. His promotional fact sheet said coaches told Brandon he was “not good enough to get the opportunity to play.”

That is something that needs to be set straight. Burlsworth was a recruited walk-on in every sense of the word. He was coveted by UA coaches.

There will be plenty of coverage of Greater, now in theaters. But I wanted to uncover the real story of Brandon's arrival at Arkansas and the first year. It was time to call Marty Burlswoth, his brother and all of the other key figures in what I call Brandon's development as an All-America offensive guard.

It starts with a visit with Harold Horton, the UA recruiting coordinator for Danny Ford. Horton recalls the story well.

“Recruited walk-on is correct in every sense of that phrase,” Horton said. “We wanted Brandon. We needed Brandon.”

But even Horton admits it took a bit of time before the coaches came to that realization. It started with a phone call from Henderson State head coach Ronnie Kerr.

One thing about the Division II schools in Arkansas, they all knew it was a waste of time to recruit someone that Arkansas planned to offer. It's easy enough to just call and ask.

“Ronnie called and wanted to know our interest in Brandon,” Horton said. “Ronnie said they had just timed Brandon at 5.0 in the 40. Let me tell you about 40 times for offensive linemen, if they run 5.0 to 5.1, that's special. That's the kind of stuff we had for Leotis Harris, Greg Koch and R.C. Thielemann. They all played in the NFL.”

Horton hung up the phone, marched down to Ford's office. He told the UA head coach, “We need to go get him. I think he might can play for us.”

Ford immediately called and invited Burlsworth to come back for a visit. That's when the offer to walk-on came.

“Every NFL offensive linemen I've ever had, they ran like that,” Horton said. “Now, you don't know if he is going to make it, but you knew then that he had a chance because it's a sure indicator of athletic ability.”

Marty remembers the day at Henderson.

“I was on that trip,” he said. “Well, I was on all of those trips. We went together every time.

“He did run 5.0. He ran it inside in a hallway I think. Some things are fuzzy from 20 or 30 years ago, but I remember that pretty well. I also remember that they weighed him. It was 300 pounds.”

That was in the early summer. Brandon had gained quite a bit of weight since the end of the high school season. He gained more before it was time to report at Arkansas. The next part of the story flips to Virgil Knight, Ford's fine strength and conditioning man.

“I remember all of it pretty well,” Knight said. “I remember the Harrison High coach (Tommy Tice) telling me at the high school all-star game that Brandon was coming here. He said, 'Virgil, he's a good one and tell him right because he will do everything you tell him exactly right.' Those were true words.”

Knight is a Fayetteville home builder now. He built bodies back in those days, or rebuilt them.

“I will never forget when Brandon came to school,” Knight said. “He walked in and it was the Pillsbury Doughboy. He was 309. I thought, 'Tommy, what have you sent me?' But Tommy was right. You just had to tell him what to do and he'd do it.”

I remember the first time I heard about Brandon Burlsworth. It was at an October practice that first fall. Virgil sat down beside me about midway through the workout. I asked him about the young players, still not with the varsity.

“We've got some good ones,” Knight said. “Remember, this was really Danny's first full recruiting class. He'd worked to find some linemen. So we had guys like Grant Garrett and Russ Brown.”

Knight pointed to Garrett and Brown. They were going to play quickly. And then there was this walk-on from Harrison. He said, “He came in heavy, but he's already dropped 30 and I bet we are going to be able to put weight back on him by Christmas. He can really run. We like him a lot.

“Our line coach, Mike Bender, loves the way he moves his feet. That's a great sign that a linemen can play. Mike likes him. So do I.”

Bang, what a great assessment that turned out to be. Knight was on target.

“We put Brandon on a diet, just mainly vegetables,” Knight said. “He lost from 309 that first day we weighed him to 252 when we sent them home at Christmas. I remember that day. Brandon came up to me and asked me if he still had to eat from the green label line.

“Here's the deal, our lunch people had different color labels on each tray. If it was green label, Brandon could eat it. If not, he couldn't. He did what we told him. He ate only the green label items.”

Brandon was ready to do back flips if he didn't have to eat from the green label trays anymore.

My next big memory of Brandon came from a visit with UA assistant coach Rockey Felker during the 1996 season. Brandon was starting at right guard. I asked Felker, the offensive play caller for Ford, if he could point out the best player on the offense.

“It's our right guard,” Felker said. “It's the sophomore from Harrison, Burlsworth.”

With that, Felker put on a tape. He pointed out Burlsworth blocking three on one play.

“He'll engage the man over him, release him, brush a linebacker enough he can't make the play and then watch this, he's going to go 20 yards down the field and get in the way of the safety,” Felker said. “That's how you get an 80-yard run. He's a heckuva player and he might be an All-American before he's done.”

Boom. Again, that's a coach hitting it right on the head of the nail.

Interestingly, Garrett and Brown didn't see it as soon as their coaches. Maybe they knew by the time Felker knew, but they don't even remember Burslworth in the freshman locker room.

Garrett, Brown and Burlsworth lettered four straight years, 1995-98. They all reported together in the fall of 1994, and all redshirted.

“I do know that Brandon and I met at the high school all-star game,” Garrett said. “We played against each other our senior years and I know we beat them. But I don't remember Brandon in that game.

“We were at UCA in Conway for all-star camp. I came out of the cafeteria and he was sitting on a concrete wall. I introduced myself. I said I was going to the UofA. He said he was, too, as a walk-on.

“Now I remember this as clear as day, I thought to myself, 'He's not going to play.' I just didn't see it.”

That was just a sign of things to come. Brown said the movie got it right when they showed Brandon late at night throwing a medicine ball around in the indoor workout area of the Broyles Athletic Center.

“That was our first year to start,” Brown said. “I was trying to do extra, watch as much tape as possible. I went over to the Broyles Center at 10:30 one night. I left around midnight. I looked out there and Brandon had that medicine ball. He was throwing it around. He was covered in sweat, like he'd come out of the pool. I thought, 'Man, this guy is giving effort still.' I thought I was by watching extra tape.

“I don't know for sure, but I figure that being in the movie came from me. I don't know that anyone else saw it. When they were writing the script, someone came to Tulsa and I sat with them for eight hours telling them about Brandon. I told them about it in that interview.”

All of those in my interview will get together Saturday for a special screening of the movie. Garrett rented a theater in Little Rock and ran down the players from Brandon's team. Brown is going.

Garrett expects to see Houston Nutt and other coaches from those teams.

“Coach Bender, our O-line coach, thinks he can come,” Garrett said. “He was Brandon's first coach at the UA. He's been struggling, but we hope he can make it.

“I can't tell you how exited I am. I've seen the movie. It's great. There are a few things that aren't right in the movie. Russ and I have talked about one thing that they got wrong.”

It has nothing to do with Brandon Burslworth.

“No, they have a scene with Coach Ford,” Garrett said. “Coach Ford asks someone would he please do something. Russ and I know that never happened. Coach Ford didn't say please to anyone.”

I'll say this, please see the movie. Bits and pieces are over and beyond. It's Hollywood. Just remember this, Brandon Burlsworth was wanted at Arkansas.

And if someone somewhere told him he wouldn't ever play, they didn't say that for long.