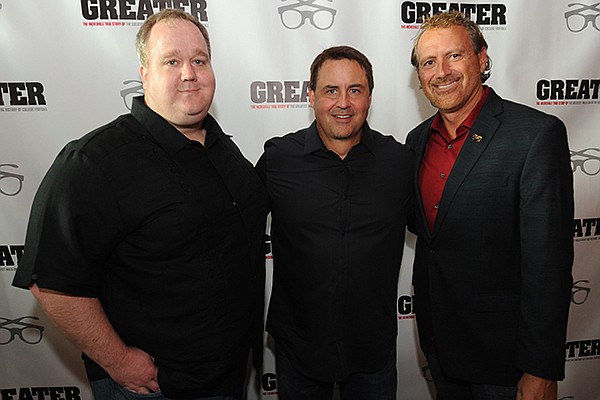 Director David Hunt (from left) poses Tuesday, Aug. 23, 2016, with producer Brian Reindl, and Marty Burlsworth, brother of Brandon Burlsworth, during a red carpet event ahead of the premiere of the movie "Greater" at the Malco Razorback Cinema 16 in Fayetteville.

FAYETTEVILLE — The two-plus hour movie depicting the life of Brandon Burlsworth is somewhere between The Blind Side and Facing the Giants.

If you go to one of the more than 400 theaters where it opens Friday looking for a movie about football, you may leave disappointed. If you are looking for an inspirational story of determination and perseverance, you'll leave delighted.

Even with a low budget, the filmmakers do a fine job of building a character we think we know entering the theater, but leave realizing we didn't know a lot about.

There are some points I wish the filmmakers would have focused on a little more. For instance, Burlsworth is told he doesn't have the grades to earn an academic scholarship to the University of Arkansas, yet we know he earned his master's degree in less than five years and became the first Arkansas football player to ever play a game with a graduate degree.

That fact is mentioned just in passing.

And the transition from his time as an overweight, seldom-used youth football player to high school starter seems a little rushed. But such is the case when you are trying to squeeze 22 years into a couple of hours.

Overall, my wife and I thoroughly enjoyed Tuesday's premiere at the Malco Razorback in Fayetteville. It's safe to say we weren't alone as the film received an extended applause twice when it finished.

If your feelings after watching the film are anything like mine, they can be summed up best in a line by the character who plays Tommy Tice, Burlsworth's legendary football coach at Harrison High School, who said, "I'm sure I'll get over Brandon's death, but I'm not sure I'll ever get over his life."

Here were my main takeaways from Greater:

The film may actually benefit from its small production budget.

This isn't a film about football, although there are some football scenes. This is a film about Burlsworth's life - his upbringing, his hard work, dedication and the impact that had on his family.

By not getting carried away with action scenes or special effects, the film builds an intimate look at Burlsworth's character and that quickly becomes our focus.

I knew a lot about Burlsworth's life, but learned more during the film, including about the uncomfortable relationship he and his brother had with their father.

Don't get caught up in historical accuracy

As producer Brian Reindl told me a few months back, filmmakers have a creative license.

There are going to be some things that will look out of place, such as games being played in incorrect years or at wrong venues.

But the film got mostly everything right, including how close Arkansas came to playing for a national championship in Burlsworth's final season. For longtime fans, that will be the second-hardest scene to watch.

The movie is mostly light-hearted

Because this is a movie about Burlsworth's life, we know how it ends.

That said, this is not an altogether somber movie. There are plenty of laughs, beginning early in the film when someone known to just about every Arkansan makes an appearance as a janitor.

There are cheesy moments, like Frank Broyles' cameo in a scene recreating Houston Nutt's hire or David Bazzel playing a sports anchor. You have to look past those. After all, name a sports movie without some cheese.

There are other cameos that are great, such as Marty Burlsworth showing up as a photographer next to the character who plays him, and Paul Eells' son, Brandon, serving as the Razorbacks' play-by-play voice.

Tough guys, go ahead and check your machoism at the door.

The crash scene hits you like a ton of bricks. It was especially hard being seated a few rows behind the Burlsworth family at the premiere. If the film didn't already feel real, their presence certainly made it hit home.

You could hear a tear drop when Burlsworth gets into his car for the final time. Sobbing was audible throughout the theater for the movie's ending.

It's a testament to how well the filmmakers build Burlsworth's character. Everyone can relate his story to some of their own.

Stay for the credits

The credits begin with a look at Burlsworth's legacy, particularly the work done through the foundation that bears his name.

One of the more impactful moments of the movie comes near the end of the credits when the thousands of recipients of the Burlsworth Character Award are listed. The award is available to players at every high school in the nation.

When the credits end, a few clips of Burlsworth remain.

Every Razorback fan is going to want to see this

Arkansas football has a cameo in many movies.

Ken Hatfield's coach's show plays in the background of Thelma & Louise, Houston Nutt and Hugh Freeze play Arkansas coaches in The Blind Side and the Big Red mascot is used in Man of the House.

But never have the Razorbacks come close to being portrayed as much as they are in this movie. Scenes are shot at Razorback Stadium, inside the Broyles Athletic Center and various other places across campus, including inside actual dormitories and outside Old Main.

Scenes were also filmed in several other Arkansas cities such as Little Rock, Springdale, Farmington, Gravette, Lincoln and Burlsworth's hometown, Harrison. There are references to other towns like Murfreesboro and the aerial views of the Ozarks are stunning.

Time will tell how it plays outside the state, but Arkansans will quickly feel a connection to the movie even if they don't know much about Burlsworth's life.