Can't miss games around the SEC 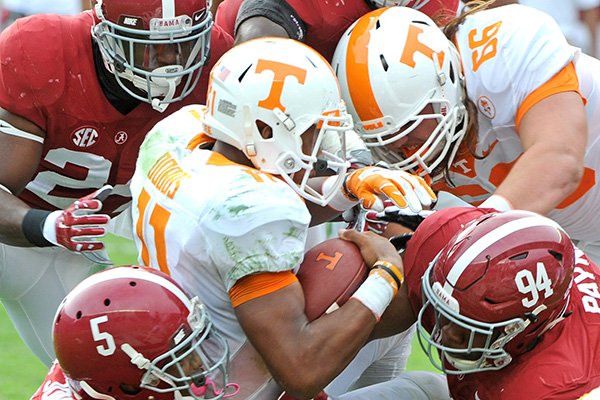 Trying to pick 10 football games this season involving SEC teams you have to watch is like trying figure out which 10 barbecue places you must eat at around the conference.

If you narrow it to 10, there’s going to be something special you’ll regret missing.

But even the most ardent fan probably can’t watch every game and eat every rib plate, so here are 10 matchups we’d suggest putting on your list.

As far as barbecue joints, that’ll be more fun figuring out on your own.

The SEC’s opening game week reads like a bowl lineup with all the heavyweight matchups, but the one we’re most interested to see is LSU taking on Wisconsin at Lambeau Field.

We know the tundra won’t be frozen yet, but that way LSU Coach Les Miles can sample some of Lambeau’s hallowed turf and not have to worry about chipping a tooth.

A great subplot to this game is that it will be the debut as LSU’s defensive coordinator for Dave Aranda, who held the same position at Wisconsin the previous three seasons.

It’s like dipping a fried Twinkie in barbecue sauce.

Why hasn’t anyone thought of this before?

There already have been about 150,000 tickets sold for the game at Bristol Motor Speedway.

The winning team receives a gaudy 88-pound trophy. No word yet on whether the winning coach gets a car so he can do victory donuts on the infield.

Could Ole Miss beat Alabama three years in a row?

Prior to last season Ole Miss never had beaten Alabama in back-to-back games.

The Rebels will have the home field advantage and quarterback Chad Kelly, but it’s hard to imagine Nick Saban losing three games in a row to anyone.

The Razorbacks and Aggies have played some wild and crazy games in Jerry World — also known as AT&T Stadium — that featured big comebacks by Arkansas in 2011 and by Texas A&M in 2014 and 2015.

It’s an early-season matchup both teams need to win to be a factor in the SEC West race.

Arkansas will be trying to beat Kevin Sumlin for the first time since he became the Aggies’ coach. So far Sumlin is 4-0 against the Razorbacks.

This matchup could decide the SEC East champion — assuming Tennessee can beat Florida in Knoxville the previous week and end an 11-game losing streak to the Gators.

Tennessee is the heavy favorite to win the East with 17 starters back from a 9-4 team in Butch Jones’ fourth season as the coach, but for the Vols to make it to Atlanta for the SEC Championship Game for the first time since 2007, they might have to beat the Bulldogs as well as the Gators.

Alabama has won nine in a row to stretch its series lead to 53-38-7, but had to rally in the final two minutes for a 19-14 victory last season.

The closest call for Alabama during its winning streak was a 12-10 victory in 2009, when Tide offensive coordinator Lane Kiffin was Tennessee’s coach.

It may not impact the West race, but the back-and-forth between Arkansas Coach Bret Bielema and Auburn Coach Gus Malzahn puts it on the “must see” list.

Maybe it’s more of a “must hear” matchup given some of their comments, especially the outspoken Bielema.

The fact Malzahn was a high school coaching legend in Arkansas who some fans wanted to be the Razorbacks’ coach after the 2012 season — when Bielema got the job — adds to the intrigue.

This will be a coaching matchup of Florida’s Jim McElwain and Georgia’s Kirby Smart, who as coordinators for Nick Saban — McElwain on offense and Smart on defense — were on the same staff when Alabama won national championships in 2009 and 2011.

While this game hasn’t had as much national relevance in recent years as it had traditionally, it remains an SEC staple.

It doesn’t figure to be long before McElwain and Smart have their teams competing for the national spotlight again.

Simply put, LSU Coach Les Miles needs to win this game and stop the bleeding against Alabama and Coach Nick Saban — the man he replaced in Baton Rouge in 2005 when Saban went to the NFL with Miami.

Beating Alabama would go a long way toward making sure Miles remains the dean of SEC coaches.

This game belongs at the top of any list of college football’s most bitter rivalries.

Winning can salvage a disappointing season. Losing makes for a miserable existence until the next meeting.

The teams have a combined six national title game appearances since 2009 with four for the Tide and two for the Tigers.

This year’s matchup figures to have title implications again, most likely for the Tide. Ruining those plans might make Auburn’s season.