State of the Hogs: Speed returns, but power remains 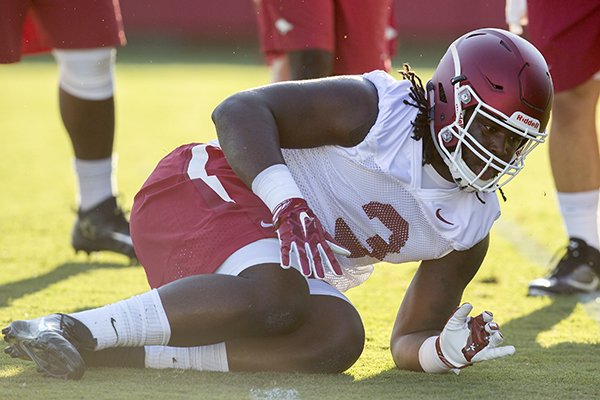 FAYETTEVILLE — Everyone has heard the story of the “freshman 15.” It's a common refrain around college campuses. Clothes don't always fit by Christmas.

There are positions on the football field where bigger is sometimes better. But there are times this fall where the Arkansas defense wants to be fast and deadly. Coordinator Robb Smith has retooled that side of the ball to be more effective against spread teams.

The release of the depth chart for Saturday's season opener with Louisiana Tech reflects what will be needed for many games this season. Look for McTelvin “Sosa” Agim anywhere from weakside defensive tackle to rush end.

For Sosa, that freshman 15 turned into 30 by spring ball. He struggled to hold his conditioning. He's so much better now. And he's got his speed back and looks like a devastating pass rusher as a true freshman. He deserves to be in the two deep and might be a starter in some packages.

Sosa is listed behind Jeremiah Ledbetter at the weakside defensive tackle, also called “3 technique” by coaches. It's the key position in the scheme Smith loves, all set for weakside linebacker Dre Greenlaw to mop up on tackles.

Outside of Ledbetter or Agim is the weakside end, probably the best player on the team in Deatrich Wise. It's cool stuff for Smith to scheme and toy with stunts and blitzes to confound offensive blocking sets on the open side of the field away from the tight end.

It could be that all of those players are on the field at the same time as Smith looks for more and more speed. It's that weakside tackle position that was lacking last year. The move of Taiwan Johnson from nose tackle to weakside tackle didn't pay many dividends. Johnson is back inside.

It's obvious that Smith is preparing for Ledbetter's graduation. Agim is getting a taste now. He's exactly what the doctor ordered for this scheme.

“Sosa gives us the flexibility we need there,” Smith said. “We are going to see a lot of four wideout sets. So we want our best pass rushers on the field. He's the kind of athlete that Led is at that position.”

There is a fascinating four-man front that Smith will deploy at some point this season, perhaps against Tech. Converted linebacker Randy Ramsey could be at rush end. Agim could be at the nose. Ledbetter would be at the 3 technique. Wise is the wide man on the weakside.

The speed is the key to making that group function at a high level. Greenlaw is a quick weakside linebacker. He's now able to read keys and wreak havoc in blitzes, something that didn't work last season.

“Dre is like night and day,” Smith said of the comparison to last year. “We just had to plug him in when we had injuries. It was well documented that we just had to throw him into the fire against Texas Tech. He has an understanding of the system now.”

It provides speed on that weakside that will be tough on blocking schemes. But it's been developed in other ways in the offseason. Of course, head coach Bret Bielema's recruiting has focused on speed, too.

Speed is great. Physical presence is important, too. There are thoughts that this Arkansas defense is also going to be able to match strength against strength against the likes of Alabama and LSU. Freshman nose tackle Austin Capps is that kind of a beast. So is Bijohn Jackson, now cross-trained at nose and the 3 technique. Both are kings of the weight room.

There is size at linebacker, too. Khalia Hackett made a move this fall camp at strongside linebacker. He was at 245 pounds last year this time. He's around 225 now. He can play against the pass, but is just what is needed in the 4-3 against tight end teams.

It's obvious that Arkansas is going to be one of those tight end teams. Bielema loves the way the young tight ends have blossomed as Hunter Henry exited to the NFL leaving Jeremy Sprinkle as the main man. Who can play along with him?

The depth chart shows Austin Cantrell and Jack Kraus as co-backups at tight end. But true freshman Grayson Gunter emerging for playing time. Bielema also said Anthony Antwine, put on the scholarship list, will play there, too. Will Gragg and Cheyenne O'Grady have improved, too. All could play.

Bielema noted that he listed two sets of tight ends in the depth chart last year. There were three starting wideout positions. He's consolidated this year. There's just one list at tight end and two at wide receiver.

“We just went with a depth chart that shows 21 personnel,” Bielema said, referencing a look with two backs and one tight end. “We might change that at some point to reflect what we are doing.”

There is more speed on offense. Among the eight wideouts listed, there is plenty of speed with Dominique Reed, Jared Cornelius, Deon Stewart and true freshman Jordan Jones. It's a group that could force play-caller Dan Enos, the second-year coordinator, to use more sets with three wideouts.

“We could, but I think we are still very multiple like we were last year,” Enos said. “We can still use multiple tight ends. I think we've got two fullbacks, too. We've got some flexibility.”

Can they still play with power? Early last year there was a move more toward the passing game. Eventually, Enos got back to the bread-and-butter power. What will be the slant this year?

“I think we will be able to use the two tight end sets,” he said. “We feel good about our wideouts, too. I think we are good at wide receiver, tight end and fullback. And, there could be someone in that group that no one is talking about right now.”

Could it be TJ Hammonds? He's the true freshman running back/wide receiver coming off minor knee surgery two weeks ago.

Could it be Jones, the freshman wideout with the incredible burst? Or is it going to be the old heads in the bunch, sixth-year running back Kody Walker or fifth-year receiver Keon Hatcher?

Will the running game be there at the outset, unlike last year? It came up Monday in the interview with Enos.

“We feel good about the running game,” Enos said. “Last year early, we were still trying to figure out who we were. Once we figured out the formula, we had balance.”

Yes, the Hogs led the SEC in scoring with big plays coming in bunches late in the season.

“I think we will pick up where we left off,” Enos said. “We have three styles of blocking – the zone, gap and man. We are not heavy in one or the other.”

Enos went through all of those weapons, but it will come down to first-year starter Austin Allen at quarterback. Can he identify the middle linebacker in pre-snap checks?

The power will still be there. All emphasize that. But it's a faster Arkansas team in Bielema's fourth year. He's looked at ways in the offseason to maximize the speed with a new plan to rest the team more on Thursday with a heavier walk-through on Friday.

It's a system that Oregon used under Chip Kelly. Kirk Ferentz, Bielema's mentor at Iowa, used it last year and went undefeated in the regular season. NFL teams have adopted similar practice plans. It leaves legs fresher for game day.

“We are not Oregon and we are not Iowa,” Bielema said. “We are somewhere in between.”

True, but mainly these Razorbacks are faster. I bet they play faster this weekend.