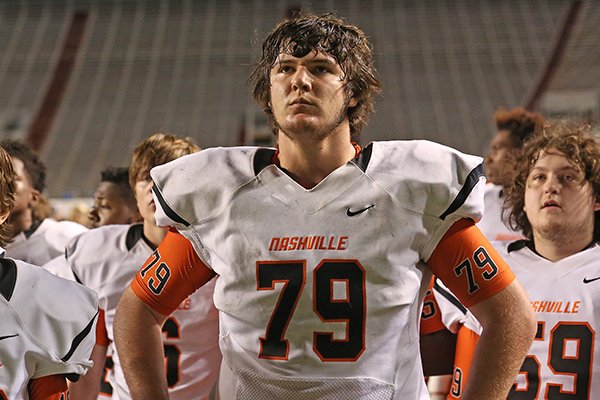 Nashville offensive lineman Kirby Adcock waits as he is announced MVP of the class 4A state championship game on Saturday, Dec. 12, 2015, at War Memorial Stadium in Little Rock.

Burlsworth is one of the more beloved players to ever don an Arkansas uniform after walking on in 1994 and becoming a two-time All-SEC pick and an All American his senior season. He was selected in the third round of the 1999 NFL Draft by the Indianapolis Colts, but was tragically killed in a car accident 11 days after the draft.

Adcock, of Nashville, saw the movie with his mother, Cindi, in Texarkana on Sunday.

"It's a great movie. It really shows when you work really hard, it pays off," Adcock said. "Not everything is just given to you. You have to work for it."

Burlsworth was strong in his faith and was traveling to his hometown of Harrison from Fayetteville to attend church with his mother when the crash occurred. Adcock said he was inspired by Burlsworth's devotion.

"I want to try and lead my myself and my team in being even more faithful," Adcock said. "Just be faithful in everything I do and trust in Him."

"I was kind of amazed at everything he did and was able to do," Adcock said.

Adcock said seeing the movie made him proud of his commitment to the Hogs.

"I really liked the highlights from some of the older games and when he told Houston Nutt that he didn't want him to bench all the seniors and rebuild," Adcock said.

He said his mother's eyes flowed with tears.

"She cried through the whole movie," Adcock said.

When Arkansas received the commitment of cornerback Jarques McClellion in late June, the Hogs got a very athletic prospect with loads of potential.

McClellion, 6-1, 180 pounds, 4.41 seconds in the 40-yard dash, of Delray Beach (Fla.) American Hertiage chose the Hogs over about 25 other scholarship offers, including ones from Nebraska, Michigan State, Louisville, Stanford and Wisconsin.

He explained his mentality on the field.

McClellion's relationship with Arkansas Coach Bret Bielema and linebackers coach Vernon Hargreaves convinced him to pledge to the Hogs without seeing the campus. A few weeks later, he visited Fayetteville and said he was very pleased with his decision.

Arkansas will be the only school McClellion plans to officially visit.

"It shows loyalty to your school," he said. "Arkansas has always been there, so there is no reason not to trust them."