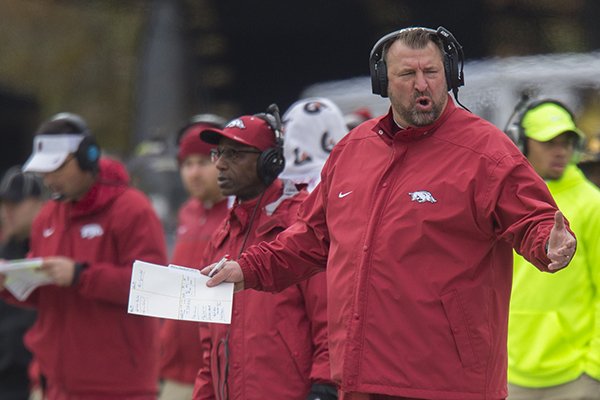 Arkansas coach Bret Bielema watches from the sideline during a game against Missouri on Friday, Nov. 25, 2016, in Columbia, Mo.

FAYETTEVILLE — Before taking part in TV coverage for the SEC Championship Game in Atlanta, Arkansas coach Bret Bielema will make a pit stop in Mississippi this weekend.

Bielema is the keynote speaker for the Mississippi Bowl banquet Friday in Gulfport, Miss. The Mississippi Bowl, a postseason game for junior college football teams, is scheduled to be played Sunday between East Mississippi Community College and Texas-based Kilgore College.

EMCC was featured in the Netflix documentary series Last Chance U earlier this year. Netflix is reportedly producing a second season of the show to be released next summer.

The trip will give Bielema a chance to interact with the JUCO circuit from which Arkansas has recruited heavily during his tenure. The Razorbacks signed four JUCO players earlier this year and have two JUCO players committed to the next signing class, including receiver Jonathan Nance of Mississippi Gulf Coast Community College near Gulfport.

Bielema is scheduled to be a co-host on the SEC Network's SEC Nation program Saturday from the Georgia Dome in Atlanta. The Razorbacks played both teams in the SEC Championship Game. Arkansas lost to Alabama 49-30 in October and beat Florida 31-10 in November.