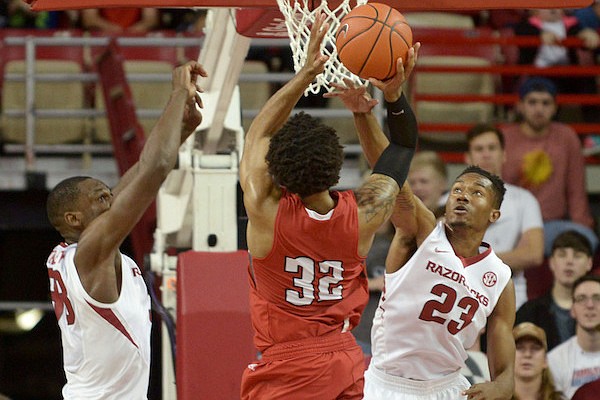 Moses Kingsley and C.J. Jones (23) of Arkansas guard as John Murry (23) of Austin Peay shoots on Saturday Dec. 3, 2016 during the game at Bud Walton Arena in Fayetteville.

The move bolstered the defensive identity of the starting unit. Hannahs had started 12 straight games and 24 of the last 25, but entered the game with a team-worst 110 defensive rating, which isn’t really a surprise. What was a surprise was his mini shooting slump entering the game. Even though he’d still scored well, he hadn’t been his usual sharpshooting self, entering Saturday night having missed eight straight 3-pointers and gone two straight games without hitting from beyond the arc.

The new-look starting lineup was actually Anderson’s sixth most-used lineup this season and had been +4 in a little less than seven minutes on the court together through six games. It performed very well Saturday, outscoring the Govs 29-15 in less than nine minutes.

Arkansas’ non-starter lineups have been iffy all year, outscoring opponents by just five total points in five games, but the re-engineered bench bested Austin Peay’s reserves 55-12 on Saturday, with Hannahs playing a key role, scoring 13 and snapping his skid by hitting 3 of 5 from 3-point range. He still played 21 minutes in a blowout, meshing well with the bench and finding creases beyond the arc against an Austin Peay defense.

Anderson spends the early portion of the season experimenting with different looks, a practice made even more necessary this year because of incorporating so many newcomers. It’s highly unlikely that Saturday will be the final iteration of the rotation, but it was arguably the most effective its been this year.

Austin Peay isn’t a great offensive team (its offensive rating slipped to No. 205 nationally after the game), but Arkansas played a solid defensive game, giving up just 87.3 points per 100 possessions, the second straight game holding an opponent to less than 90.

The rotation seemed to work well on that end. Arkansas had a solid 37 deflections Thursday and followed it up with a season-high 45 against Austin Peay. The Govs limited their turnovers to 13, but paid dearly for nearly every one as the Hogs scored 25 points off turnovers and pushed the pace for 28 fast-break points.

Arkansas’ adjusted defensive rating (points allowed per 100 possessions) is down to 97.4, good for 75th in the country. The competition in the last few games hasn’t been especially strong and neither team has run a heavy dose of pick-and-roll, often Arkansas’ kryptonite in the halfcourt, but the performances have been encouraging.

That last one is the most important and most notable of the bunch. The five assists were a career-high and played an important role in a humming Arkansas offense that posted a 135.6 rating.

Austin Peay continued the trend of opponents’ doubling Kingsley in the block. He scored a few times off post-ups, including the aforementioned authoritative dunk, but more often he kept his head up and found cutters and shooters, slipping heady passes to expose the overextended Austin Peay defense.

Arkansas played inside-out in the halfcourt and it paid off, both with Kingsley post-ups and some solid utilization of the high post with Thomas when Austin Peay went to a zone.

Kingsley’s teammates did a better job both spacing the court and playing off the double teams than they have previously. He calmly accepts a double here as Thomas smartly dives to the rim for a layup.


It was an encouraging sign that the group is learning how to turn the threat of a Kingsley post-up into a numbers advantage when defenses commit to digging down and doubling.

Kingsley won’t score as much as he did last year with the added offensive options, but he still commands extra defensive attention on the block, a pull that can grease the gears of the offense if the Hogs play it right. They did Saturday.

That 135.6 rating was the exception, not the norm, the result of Austin Peay turnovers, good 3-point shooting and offensive rebounding. But Arkansas does rank No. 33 in the nation with an adjusted offensive rating of 110.6 points per 100 possessions, an impressive number despite all the moving parts and question marks.

Adrio Bailey played a season-high 12 minutes in Thursday’s win over Stephen F. Austin, then topped that with 18 minutes Saturday. The bouncy undersized forward was impressive and active against Austin Peay, posting 14 points, seven rebounds and two blocks, all career-highs.

He is still raw, more so than the juniors (Trey Thompson, Arlando Cook) ahead of him in the bench big rotation. But his athleticism and energy allows him to impact the game in ways the others can’t.

He's explosive as a duck-in man off a nice dish from Beard (more on his exemplary passing in a bit).


Four of his rebounds came on the offensive end, a team-high total as the Hogs rebounded a season-best 19 of their own misses and turned them into 26 second-chance points against an undersized Govs team.


Bailey only played 19 minutes in the first five games, including one DNP-CD, but is averaging 21.3 points, 9.3 rebounds and 2.7 blocks per 40 while playing 30 minutes as part of the regular rotation the last two games.

His potential is intriguing. Smart move by Anderson to give him a bit more run in nonconference action. He has a unique skillset that could help the Hogs in January or February. He even hit a mid-range jumper, an area he’s worked hard to improve on after changing his form once he arrived on campus in the summer.

Shooting isn’t an issue for Jones, who has played a bit role off the bench this year, playing double-digit minutes four times in seven games while showing flashes of his ability to provide instant offense. Saturday was the second straight game he knocked down multiple 3-pointers and the second time this year he’s scored in double figures in 17 or fewer minutes.

Jones finished with 11 points in 15 minutes, hitting 3 of 4 3-pointers as part of a team-wide 9 of 23 performance from deep.

People close to the program opined that he had the most upside and NBA potential on the team before the season, but the experience ahead of him and his shortcomings might limit his time. But his scoring ability has been more than enough to earn him a regular spot in the rotation, one that will grow if he can make strides defensively.

Long-term, the future is bright for these two.

Arkansas went on big runs in both halves, breaking the game open with a 21-4 run in the first half and removing any doubt about the outcome with a dominant 31-4 stretch in the second. A rare three-big lineup helped spark the former when Anderson decided to go with size in contrast to Austin Peay’s small-ball approach.

It worked well. The Beard, Hannahs, Bailey, Arlando Cook and Trey Thompson group outscored Austin Peay 10-0 in a 5:03 stretch on the court midway through the first half. The group played together for nearly a quarter of the game and decimated the smaller Govs, outscoring them 23-4 in 9:26. 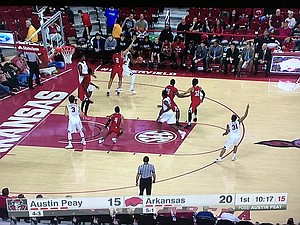 The lineup worked even though the spacing in the halfcourt wasn’t great and there is an inherent lack of shooting on the court.

One of the three bigs has to play on the perimeter (it was usually Cook on Saturday). Smart teams that know the lineup is coming will ignore said big and shrink the rest of the floor. But the group dominated the glass Saturday, grabbing five offensive rebounds during the span, part of a dominant performance on the glass for the Razorbacks, which outrebounded Austin Peay 47-31.

Arkansas gets five cracks at it on this marathon possession which featured two offensive rebounds from Bailey and one from Thompson. Cook was also active on the offensive glass, where he gathered all three of his boards.


Beard and Hannahs served as scoring threats, while Bailey, Cook and Thompson provided a defensive disposition in an intriguing, lengthy look that helped cover up defensive shortcomings from perimeter players like Hannahs and Jones, whose off-ball defense on closeouts and rotations are issues.

Arkansas has a pretty informal approach to who brings the ball up the floor and gets the team into sets, but Barford and Beard are the two nominal point guards who operate mostly as primary ballhandlers. They're entirely different players, with Barford displaying increasingly frequent mad dashes to the rim while Beard asserts himself in a calmer, more calculated manner and displays a knack for heady passing.

Barford hasn’t been quite the playmaker for others that his performance in August practices suggested. More of a combo guard by nature, he had 12 assists and 15 turnovers in the Hogs’ first six games.

He posted a solid four assist, no turnover line Saturday to go along with 12 points and six rebounds. His ability to set the table for others is still a work in progress as he grows comfortable in his role.

The main flashes of his playmaking ability so far have stemmed from sequences when he motors full speed ahead at the rim, getting downhill and using his broad shoulders to shield defenders from the ball and as he uses nifty finishes to convert impressively despite moving at a high speed.

Arkansas’ best player at penetrating and finding others so far has been Beard. The junior point guard is exceeding expectations, looking like an improved version of his freshman self rather than the sophomore-slump imposter who never recovered from missing half a year.

Beard is averaging a team-best 3.3 assists in 19.1 minutes a game. He’s scored and shot well (8.6 points on 41.7/40/80), but has shone with how he’s been in control, able to break down the defense and set up others, in the halfcourt (the above dish to Bailey), on the break and in semi-transition.

Nifty no-look to Thompson on the second.

He doesn't have the size to attack the rim like Barford, but he too has finished well amongst the trees for his (generously listed) 6-foot height, using guile to get shots off around the basket.

Barford was +26 in 21 minutes on Saturday, while Beard was a +13 in 17. Neither are distributing the ball at the rate Jabril Durham did last year, but both are far more dangerous scorers and have the potential to be a better lead-guard combination than Durham and the sophomore Beard were.

— Kingsley is a much better overall defender and rim protector than Bobby Portis, but Portis was better at switching onto guards on the perimeter. Too often, Kingsley doesn’t sink into a stance, making it difficult for him to keep smaller players in front of him.

— Hogs made 9 of their final 17 3-pointers, including 6 of 11 in the second half, after missing their first six.

— Terrible possession to end the first half for Arkansas. The Hogs got the ball back with the shot clock turned off and plenty of time to spread the floor and run an action. They dribbled around, resulting in Kingsley catching a pass at the top of the key and traveling when he tried to put the ball on the floor. Instances like that are when it’d be nice to see a more effective approach.

— Best crowd of the year as a result of a lot of ticket giveaways by the university. By far the biggest crowd in the upper bowl this season, a good chunk of which moved downstairs when they were invited at halftime.