Foster rooted in Hogs vs. Cougars 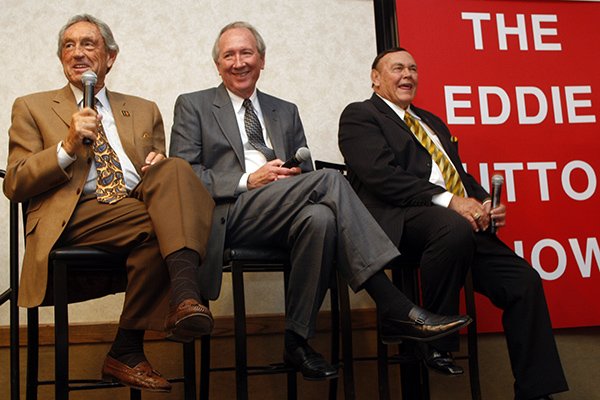 From left: Eddie Sutton, Pat Foster and Gene Keady participate in a panel at the Little Rock Tip-Off Club on March 29, 2010.

FAYETTEVILLE -- Nobody worked both sides of the old Arkansas-Houston basketball rivalry like Pat Foster.

Foster, now retired from coaching and living in Fayetteville, is excited to see a second renewal of the rivalry on Tuesday night at Walton Arena.

Arkansas, now in the SEC, and Houston, a member of the American Athletic Conference, played their SWC finale on Feb. 7, 1991 at Houston's Hofheinz Pavilion. They also played in North Little Rock at Alltel Arena in 2011, but this is the first time they have met on campus.

Foster, an Emerson native enshrined in the University of Arkansas Sports Hall of Honor as a 1960s All-SWC basketball player and baseball first baseman and 29 years as a college basketball coach, was an assistant to Hall of Famer Eddie Sutton when the Razorbacks introduced Houston Coach Guy Lewis and his Cougars to SWC basketball on Jan. 5, 1976 at Barnhill Arena.

Before his career ended, Foster, as head coach of Houston, went against Hall of Famer Nolan Richardson for 11 Arkansas-Houston games.

Foster relishes that he got to work with two coaching giants. He assisted Sutton six years at Arkansas and in 1986-1987 succeeded Hall of Famer Lewis at Houston after six years as the head coach at Lamar.

"You had two Hall of Fame coaches," Foster said. "Tuesday night I will be thinking I had an association with both of those guys. If Guy Lewis hadn't signed off on me getting the job after him at Houston, I never would have gotten it. Guy always helped me any way he could. And of course Eddie was responsible for me getting a head coaching job anywhere."

Foster said to "make sure everybody knows I am rooting for the Razorbacks," but he said the basketball impact of Houston joining the SWC in 1976 should never be minimized.

"The Southwest Conference was just a football conference," Foster said. "That changed with Houston coming into the league and Coach Broyles hiring Eddie. And then (Athletic Director-Football Coach) Darrell Royal had Texas join the game and hired Abe Lemons."

Lewis and the Cougars arrived with more basketball fame from one game than the entire Southwest Conference.

"The Game of the Century" it was called in 1968. Houston snapped the 47-game winning streak of Coach John Wooden's UCLA Bruins, 71-69. It was witnessed by 52,000 at the Houston Astrodome and nationally televised by novice network TVS.

"That was the real start of nationally televised games," Foster said. "They had advertisers calling at halftime trying to get 30- second spots in the second half."

Houston was so marquee with All-American guard Otis Birdsong that Foster recalled TVS came to Fayetteville for the Cougars' 1976 SWC debut. It was the most surreal game ever played at Barnhill. The Razorbacks romped, 92-47.

"They had that game on all over the place and that really vaulted the University of Arkansas into the basketball big-time with the publicity we got," Foster said.

The Hogs and Cougars rematched in Houston seven days later, with Houston winning 72-71.

Foster saw a rivalry born. He will watch its rebirth Tuesday night.