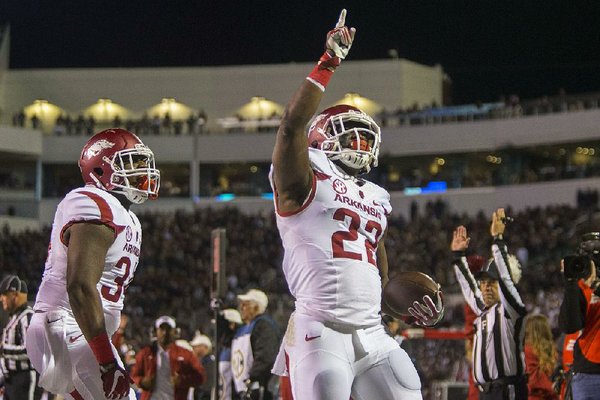 NWA Democrat-Gazette/JASON IVESTER Arkansas running back Rawleigh Williams (22) celebrates after scoring a touchdown against Mississippi State on Saturday, Nov. 19, 2016, at Davis Wade Stadium in Starkville, Miss., during the second quarter.

The Razorbacks (7-5) accepted a berth in the Belk Bowl on Sunday to take on Virginia Tech (9-4), winner of the Atlantic Coast Conference's Coastal Division.

Kickoff is scheduled for 4:30 p.m. on Dec. 29 at Bank of America Stadium in Charlotte, N.C., home of the NFL's Carolina Panthers.

Arkansas Coach Bret Bielema, who worked the SEC championship game as an analyst for the SEC Network in Atlanta on Saturday, met with the media on Sunday evening then flew immediately to New York City for activities related to the National Football Foundation's annual awards ceremony and for recruiting.

Bielema said he watched Virginia Tech's 42-35 loss to No. 2 Clemson in the ACC championship game because there had been talk that Arkansas might match up against the Hokies under first-year Coach Justin Fuente.

"Coach Fuente obviously has been very impressive," Bielema said. "We first crossed paths that I know of when he was at TCU. We played them in the Rose Bowl when I was at Wisconsin.

"A tremendous talent. I am very, very impressed with what he did in Memphis. Then obviously the things they've done this year when they took over in transition to be where they were and play as well as they did last night."

Belk Bowl executive director Will Webb indicated in an interview with the Arkansas Democrat-Gazette on Friday that Arkansas was the bowl's top target on the SEC side, and that Virginia Tech was a likely opponent.

Webb said the Belk Bowl was "very enthusiastic and very excited about the possibility of Arkansas" playing in the game.

"They're growing and making progress," Webb said of the Hogs.

Asked about Arkansas' up-and-down season, Webb replied, "Look at the conference and look at the division they play in. They've got to play Alabama, Auburn, LSU and so on.

"I think they're making progress and maybe next year the ball will bounce their way and everything will come together."

Bielema said the Razorbacks were still finalizing travel plans, but would likely travel to Charlotte on either Dec. 24 or 25 to get in a few practices before the game.

"It's going to be a good challenge," Collins said.

"We're very blessed to have this opportunity and we're excited to go out and show our fans one more time what this team has to offer," said sophomore running back Rawleigh Williams III.

Collins and Williams said they watched some of Virginia Tech's game against Clemson.

"They have a really good team, so it'll be a challenge for us," Collins said.

Virginia Tech will be playing in the postseason for the 24th consecutive year, which is the longest active streak of bowl participation in the nation, according to ESPN.

Both teams have a two-game winning streak in bowls.

Fuente, who played his high school ball at Tulsa Union under current Fayetteville High School Coach Bill Blankenship, issued a statement about the matchup against Arkansas.

"We owe a huge debt of gratitude to this senior class and our staff will do everything possible to prepare our squad to face a quality foe like Arkansas," Fuente said.