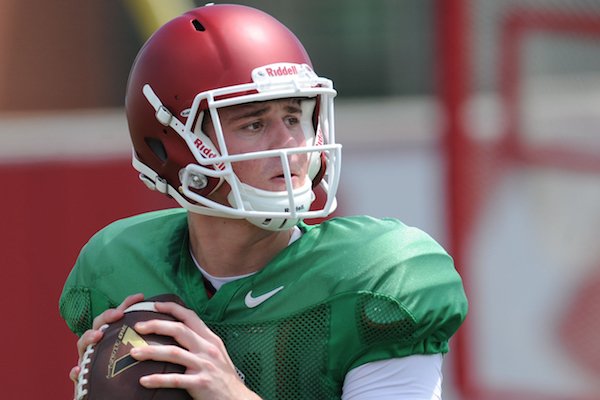 Arkansas quarterback Ricky Town participates in a drill during practice Saturday, Aug. 6, 2016, at the football practice field on the university campus in Fayetteville.

FAYETTEVILLE -- Arkansas running back Damon "Duwop" Mitchell and quarterback Ricky Town will stay with the Razorbacks through the Belk Bowl before pursuing a transfer, Coach Bret Bielema said on Sunday night.

Mitchell, a redshirt junior from Egg Harbor, N.J., plans to play at another school as a graduate transfer, Bielema said.

"I've worked diligently with him over the last couple of weeks to find a place for him next year," Bielema said. "I'll let him announce where that is as he moves forward, but he will play in the bowl game for us."

Mitchell's decision isn't a surprise. He was introduced with the seniors during Arkansas' final home game against LSU. Mitchell has played primarily on special teams this season and has six tackles. He also has 7 carries for 18 yards.

Town, a redshirt sophomore, hasn't played for the Razorbacks. He transferred to Arkansas before the 2015 season and redshirted after enrolling at Southern California in January of 2015 and going through spring practice.

"He's expressed he wants to find some place next year that can get him on the field and let him showcase his skills," Bielema said.

If Town plays at a junior college in 2017, he can transfer to another four-year college with two seasons of eligibility.

"He's been engaged, locked into every game plan. He just feels there's a better opportunity for him out there."

Daulton Hyatt, a 6-4, 178, from Attala, Ala., is projected to be an early enrollee at quarterback for the Razorbacks.

Bielema praised the work Fuente has done as as an offensive coordinator and early in his head coaching career at Memphis and Virginia Tech.

"He's had such a great name for a long time," Bielema said of Foster, a four-time finalist and 2006 winner of the Broyles Award. "I kind of idolized him just because he was a D-coordinator growing up and with what Coach [Frank] Beamer had been able to do."

Coach Bret Bielema said if linebacker Dre Greenlaw can get cleared to play within two weeks of the Dec. 29 Belk Bowl, he'll feel good about the sophomore's chances for playing against Virginia Tech.

Greenlaw suffered a broken foot against Alabama on Oct. 8 and originally had a 4-to-6 week recovery period. Greenlaw led the team with 36 tackles at the time of his injury.

Bielema said injuries to Greenlaw and defensive back Kevin Richardson had a big impact on the Arkansas defense.