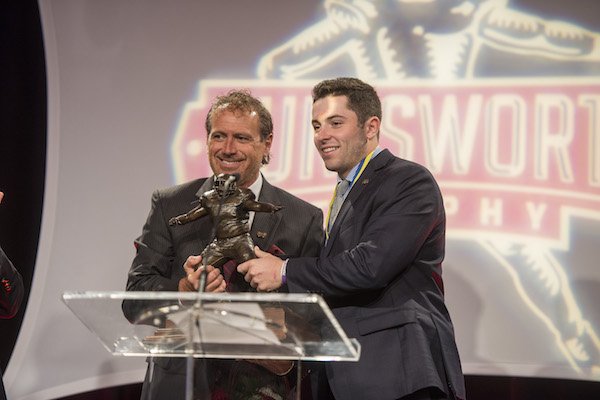 SPRINGDALE — Baker Mayfield's trip to Arkansas on Monday began like his last trip to the state, but ended differently.

Like last December, the Oklahoma junior quarterback was named winner of the Burlsworth Trophy during a luncheon at the Northwest Arkansas Convention Center. Unlike last year, Mayfield ended the day with an invitation to the Heisman Trophy ceremony in New York.

Mayfield became the first two-time winner in the seven-year history of the Burlsworth Trophy, which is presented by the Rotary Club of Springdale to the nation's best college football player who began his career as a non-scholarship walk-on.

"We'll see what happens [with the Heisman], but I'll enjoy this because it means a lot to me," Mayfield said.

"[Mayfield] is a great player and he's on a great team," said Carr, who is also a finalist for the Biletnikoff Award as the nation's best receiver. "Oklahoma's had an amazing year. Whenever your team finds success, that does point to your performance being really game-changing."

Mayfield was named one of five finalists for the Heisman Trophy late Monday along with Louisville quarterback Lamar Jackson, Clemson quarterback Deshaun Watson, Michigan linebacker Jabril Peppers and Oklahoma receiver Dede Westbrook. Mayfield finished fourth in the Heisman voting last season, but did not receive an invitation to New York because he did not receive enough first-place votes.

Mayfield has completed 71 percent of his passes for 3,669 yards and 38 touchdowns this season. He led Oklahoma (10-2) to its second consecutive Big 12 championship with a 38-20 victory over Oklahoma State on Saturday and also is a finalist for the Maxwell Award (nation's best player) and Davey O'Brien Award (best quarterback).

But Mayfield has vocally endorsed his top target, Westbrook, to receive a Heisman vote instead of himself. Westbrook, who also is a finalist for the Biletnikoff Award, has 1,465 yards and 16 receiving touchdowns this season.

"Dede is the best player in the country," Mayfield said. "One of the main reasons I'm here right now is because he's made me look good."

Mayfield walked on at two schools . He started seven games at Texas Tech as a freshman but transferred to Oklahoma following the 2013 season. After redshirting, he won the starting job over Trevor Knight before the 2015 season and is 21-4 as the Sooners' starter. He has already announced he will return to Oklahoma for his senior season next year.

"It's symbolic and it's ironic," Mayfield said of winning the Burlsworth Trophy twice after being a two-time walk-on. "It's special. My journey has been a lot of ups and downs, a lot of challenges, but I wouldn't draw it up any differently. You learn a lot along the way and it has made me who I am today.

"This award is not about where you're at today, but about how you got there and the people who helped you out. It's got meaning beyond just one season and that's why it means so much."

The Burlsworth Trophy is named for former Arkansas offensive lineman Brandon Burlsworth, who transformed from a walk-on into a scholarship all-American as a senior in 1998. Burlsworth was selected by the Indianapolis Colts in the third round of the 1999 NFL Draft, but died in a car crash near his hometown of Harrison 11 days later.