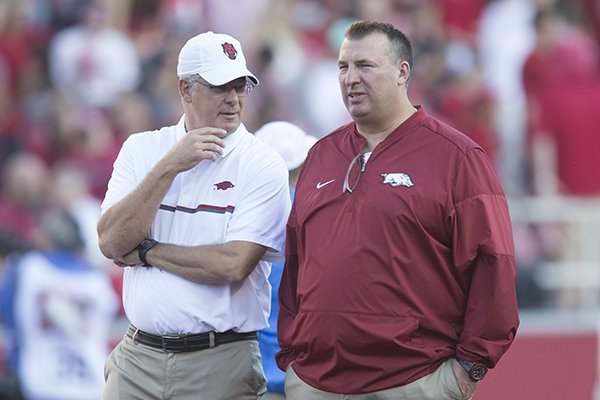 The offer comes almost a month after Anfernee, his older brother and highly recruited junior linebacker Alston and his parents visited Fayetteville for the Razorbacks' 31-10 victory over Florida on Nov.5.

"The visit was amazing," Orji said. "The game was good with a nice Arkansas win. The atmosphere was incredible with good fans from all over. The football area is excellent with a good weight room and locker room."

Anfernee, 6-1, 195, 4.55 seconds in the 40-yard dash, of Rockwall, Texas, is also receiving interest from Texas A&M, Alabama, Oklahoma, TCU, Stanford and others. He recorded 96 tackles, 2 tackles for loss, 7 pass breakups and a forced fumble in 12 games this season.

"It's exciting to get my first offer and it means even more because it was from the great school of the University of Arkansas," Anfernee said.

Alston also has an offer from Arkansas, among others.

Their parents, Willy and Mariam, are originally from Nigeria and stress academic excellence. Willy Orji is a computer engineer while Mariam is a general surgeon specializing in minimally invasive and robotic surgery.

Anfernee has a 4.5 grade-point average on a 5.0 scale while taking advanced and pre-advanced placement classes for his core courses. He's exploring his options for majors in college and is considering following his father's footsteps

"I like computer engineering, but I'm not completely sure yet," Orji said.

"I've seen film on him and he's an outstanding DB with great range," national recruiting analyst Tom Lemming said. "He has big-time speed and hitting ability."

Arkansas linebackers coach Vernon Hargreaves visited the school Monday to check on the two brothers. The younger Orji is hoping to make a second trip to Fayetteville.

"I'm not sure yet, but I would love to go back in the near future," Anfernee said.

Junior guard Fred Thatch Jr. and Arkansas basketball assistant Scotty Thurman communicate on a regular basis and is hoping to visit based on that relationship.

"We talk a lot," Thatch said. "We talk about how our day is going and we talk about life a little bit. Not anything too big. We communicate like twice a week."

He was planning to visit for the North Florida game Saturday, but was unable to make it. He's now looking to visit a January game.

Thatch, 6-3, 198 pounds of Sikeston, Mo., has scholarship offers from Missouri, Tulsa and St. Louis while drawing strong interest from Arkansas.

He wasn't aware of Thurman hitting the tie-breaking three-pointer against Duke in the 1994 national championship game, helping Arkansas to a 76-72 victory.

"I didn't even know that until my high school coach told me because his wife is from Arkansas," Thatch said. "She's a big Razorback fan so she was telling me all about him. I probably learned about his whole life story in 20 minutes."

Thatch averaged 20.7 points, 10 rebounds, 4.8 assists and 2.5 steals a game and was named a MaxPreps Boys Basketball Sophomore second team All-American while leading his team to a 28-3 record.

He's impressed with Thurman's resume as a player at Arkansas.

"That's big-time," he said. "It shows you a lot about him as a coach and a past player. There's obviously things I can learn from him."

Thatch, who has a 4.23 grade-point average, played for the 16-under St. Louis Eagles during the spring and summer. He said he's a lockdown defender with excellent quickness and a high basketball IQ.

"My jump shot is actually pure now," Thatch said. "I can score on all three levels. I can score at will as far as the high school level. I have some explosiveness in me and a little bounce. I play hard. I'm a dog."

Defensive tackle Javier Edwards, 6-3, 350 pounds, of Blinn College in Texas is expected to announced his decision Wednesday. He committed to Florida in June, but said he was longer committed to the Gators after officially visiting Arkansas last weekend.

He plans to choose from Arkansas, Colorado and UNLV.

Defensive backs coach Paul Rhoads recruited Edwards out of Aldine Davis High School in Houston while he was the head coach at Iowa State and the relationship is still strong. Rhoads and Coach Bret Bielema made an in-home visit with Edwards on Wednesday.