State of the Hogs: Heat on Robb Smith's defense to slow Hokies 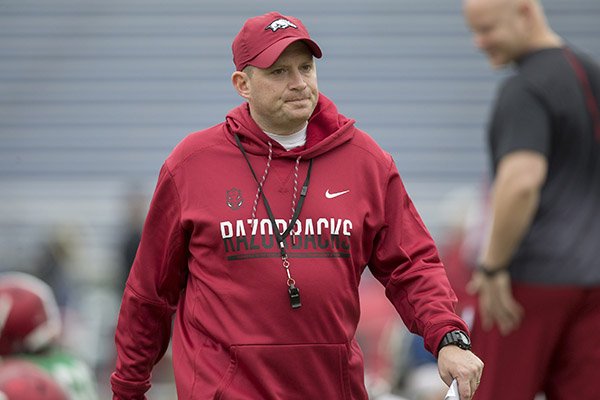 Arkansas defensive coordinator Robb Smith knows what that means. You've heard of putting a spy on a dual-threat quarterback. You better do more than that against Evans.

“You have to stop the quarterback first, have someone on him in the run game,” Smith said. “And then you better have a guy assigned to him all night long.”

Smith met the media Tuesday in a scorching hot interview room in the Hilton City Center in the heart of the Queen City. The heat was full blast on a day when air conditioners were running everywhere else in downtown Charlotte.

It seemed appropriate. The heat has been on Smith all year to find some answers on defense.

The Hogs gave up a school-record 36 rushing touchdowns this season - many to dual-threat quarterbacks on called runs or scrambles. There were 15 touchdowns by quarterbacks.

Smith was asked if he knew that stat. Yes, he did, and he smiled as he said, “I've tried to forget.”

The Virginia Tech offense features complex blocking schemes with lots of pulling linemen and cross-blocking by big wide receivers, including former tight end Bucky Hodges (6-7, 245 pounds). It's something akin to what Auburn once ran with Cam Newton, the NFL quarterback hanging out in Charlotte these days.

“They have a lot of designed quarterback runs,” Smith said. “He shows excellent patience when following those pullers. He's a heck of a football player.”

Evans is just as good when the Hokies get one-on-one matchups on the perimeter. Hodges is massive, but so is wideout Isaiah Ford (6-2, 195). The look they want is probably against a small cornerback, just like they'll find with Jared Collins (5-11, 173) on the wide side to the field. It's what Evans looks for when they get in scoring range.

Collins has seen a steady diet of fades in bowl practices. He's worked hard to find the ball against big, physical receivers.

“The guy who I've practiced against the last couple of weeks in preparation of this game has been Jamario Bell,” Collins said. “Jamario looks just like the guys I'm going to see.”

Bell (6-5, 252) has spent the last year at tight end after making the move from defensive end ahead of spring practice.

“They look for that fade, then they use their big guys to try to get an edge with the blocking in the run game,” Collins said. “We know we are going to face a physical attack on the perimeter with their big guys, but that's the look we've gotten in practice. Bell is similar to their guys and he's given us the look we needed.”

Of course, the Hokies will try to stretch the field, just as Missouri did in the 28-24 victory over Arkansas in the regular season finale.

“They have guys who can go vertical,” said Collins, beaten consistently in the Missouri game.

“That game is not out of our minds,” Collins said. “We want to get back on the field, play much better than that.”

It's just like all season, the Hogs are trying to bounce back after a loss. They've not won back-to-back games since beating Louisiana Tech, TCU and Texas State to start the season, but there have never been back-to-back losses in their 7-5 campaign.

There seems to be hope that Smith has more bullets on defense than he did in the Missouri game. Linebacker Dre Greenlaw and end Deatrich Wise are healthy.

Greenlaw has been out since the first quarter of the Alabama game. He had surgery to repair a broken foot. Smith cautioned that Greenlaw is not in shape to play every snap, but could play considerable minutes against Tech.

Wise has not missed a game, but has played with a broken hand, shoulder separation and a leg injury. He was the Hogs' best player down the stretch in 2015, dominated in the spring and was expected to be a top NFL prospect.

The defensive front was reshuffled after the Auburn loss, with Wise relegated to pass rush situations on third down.

Jeremiah Ledbetter switched from tackle to end to try to firm up the edge. It's not clear if that weakside triangle Smith had visions of relying on this year is back for the Belk Bowl.

“I do like the idea of having Dre back behind me,” Ledbetter said. “And we have the old Deatrich back. I will say that both of them have been vocal in our practices. They are always vocal, though. That's one of the things they do.”

Smith is hopeful that the “old No. 48 is back,” referencing Wise's number.

“I will say this, he's practiced really hard,” Smith said. “When he's on, he's a real weapon for us.”

The Hogs might have another weapon, possibly showing Tech a 3-4 scheme instead of Smith's usual 4-3. How might Wise and Greenlaw impact a game in that alignment?

No one wants to say Wise and Greenlaw can make the difference in the Belk Bowl for Arkansas.

No one wants to say how much 3-4 could be in the package, or put that kind of heat on two players.

No, the heat seemed to be on Smith on Thursday. Well, it was hot in that conference room at the Hilton City Center.