Williams should return for 2016 season 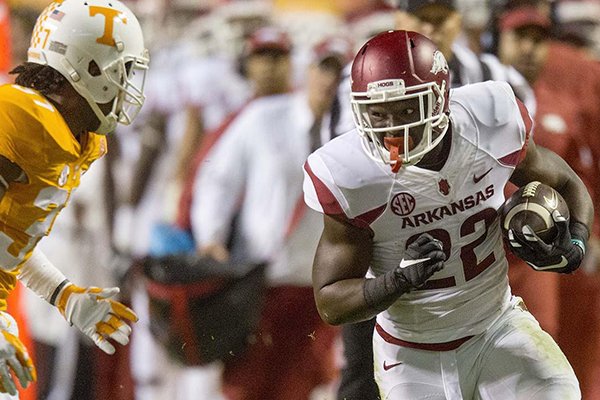 Arkansas running back Rawleigh Williams runs during the second quarter of a game against Tennessee on Saturday, Oct. 3, 2015, at Neyland Stadium in Knoxville, Tenn.

FAYETTEVILLE — Arkansas running back Rawleigh Williams should be able to return for the 2016 season, Razorbacks coach Bret Bielema said.

Williams, who suffered a severe neck injury that required surgery in October, has been cleared by two doctors to go through non-contact scrimmages with the Razorbacks this spring, but Bielema said that isn't likely.

"I don't think I'm going to allow that," Bielema said. "It's going to be very guarded positions I put him in for his well-being and my well-being."

Williams rushed for 254 yards and a touchdown, and was named freshman all-SEC last season. He was carted off the field in the third quarter of a game against Auburn when he absorbed a helmet-to-helmet hit.

Bielema said receiver Drew Morgan (shoulder) and cornerback D.J. Dean (toe) are recovering well from off-season surgeries. He said linebacker Josh Williams (leg) is also recovering well, but there are no guarantees he will be able to play again.

He also confirmed that linebacker Randy Ramsey is also back with the team as a walk-on. Ramsey lost his scholarship when he was kicked off the team following his freshman season in 2014.

Bielema said linebacker Dre Greenlaw, tight end C.J. O'Grady and defensive end Jamario Bell have been suspended from the program for a week for academic reasons.