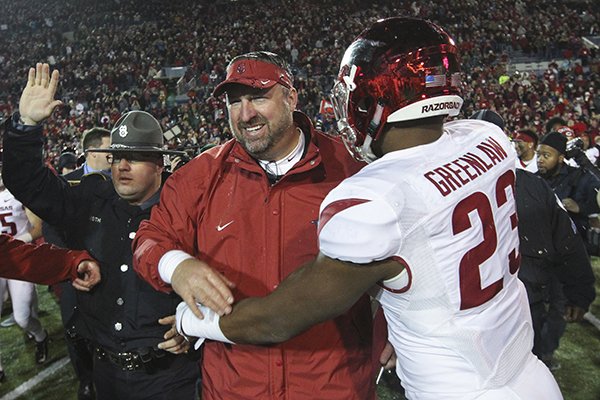 "Until they show me that they're going to uphold the standards I believe they have to academically, they'll be removed, just to put a reminder in their ear it's academics before athletics to get on the field," Bielema said at his national signing day news conference.

Greenlaw started the final 11 games at weak-side linebacker and ranked second on the team with 95 tackles. O'Grady and Bell both redshirted in 2015.

Running back Rawleigh Williams III has received another level of clearance in his recovery from surgery to repair a broken bone in his neck.

Coach Bret Bielema said Kim Williams, the player's mother, asked to get a second opinion on the running back's prognosis.

"As a mother should, [she] found a second opinion to go visit with, and what was awesome is it lined up exactly with what our people on campus had said," Bielema said. "If all things go forward, he should be full-go for fall."

Williams has been cleared for all weight work and nonscrimmage work for spring drills, but Bielema said he'll be limited.

Sophomore Hjalte Froholdt has switched sides of the ball and will line up at offensive guard this spring. Froholdt, a top signee last year, posted three tackles and a fumble recovery while playing in 10 games.

Damon "Duwop" Mitchell has approached Bielema about playing either safety or running back after notching 6 catches for 84 yards and 1 touchdown as a receiver last year.

A position for sophomore Kendrick Jackson, a linebacker signee who worked at fullback last year, has not been determined, Bielema said.

Bielema praised the recent progress of linebacker Josh Williams, whose rehabilitation from surgery for a broken leg had previously run into obstacles.

"Josh Williams has had two weeks of recovery as good as he's had since he's been injured," Bielema said. "That was a very significant injury. If he can get back out there and play for us, that'd be absolutely awesome. If not, he'll be involved with us as a coach, no problem."

• Coach Bret Bielema said the Razorbacks could add up to three players in the current signing class, and that late additions, such as senior graduate students, could factor in. "These senior transfers are very, very intriguing," Bielema said.