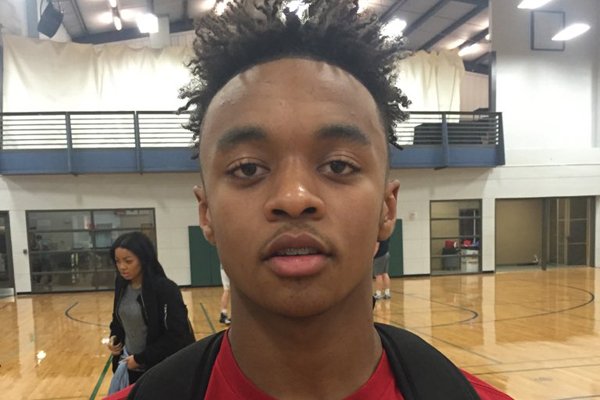 Hill and his parents met with Anderson after the Razorbacks defeated Tennessee 85-67 at Walton Arena on Feb. 6 and learned of the offer. He called Anderson on Saturday and told him he was ready to be a Hog.

"After much prayer and discussion with my parents, I have decided to accept the basketball scholarship offered to me by Coach Mike Anderson," Hill said in written statement. "I consider it an awesome honor that Coach Anderson would extend an offer to me for the Class of 2019."

Hill, 5-11, 160 pounds, was drawing interest from Virginia, Connecticut, Stanford and Oklahoma State. He said he's looking forward to helping the Hogs return to the glory days.

"By accepting this scholarship, I'm committed to Coach Anderson's vision of hanging another national championship banner in Bud Walton Arena during my tenure," Hill said in the statement.

Hill played for the 14-under Arkansas Hawks last summer and got on the radar of college coaches and highly regarded scout Clark Francis, who has been the editor of Hoop Scoop since 1983. Francis said he liked what he saw in Las Vegas.

"[Francis] does the rankings for the younger kids, and he said Justice is a top 10 player in the country in his age group," said Bill Ingram, who is the executive director of the Hawks organization.

Anderson's aggressive style of play is attractive to Hill, he said.

"The style he plays fits the style I want to play when I'm in college," Hill said. "I like the uptempo and the way they get up and down the floor fast. I don't like to come down and play slow."

Hill, who's averaging 14.9 points, 2.6 rebounds and 3.9 assists per game in conference play this season, is the son of former UA football assistant coach and current Arkansas Baptist College president Fitz Hill and his wife Cynthia.

"Justice's mother and I are truly proud of this opportunity," Fitz Hill said in the statement. "Justice will discover there is nothing like being a Razorback with the fan support base of the entire state. I have witnessed the basketball program at its peak in the '90s when Bud Walton was always sold out and the fans were calling the Hogs. When that's happening, there is no better place to play in America."

Justice Hill has been selected to participate in the prestigious Pangos All American camp in the Los Angeles area in June.

"There's not many freshmen that get an invite to the Pangos," Ingram said. "It's so unbelievable some of the stuff he can do as a ninth grader."

The Hills plan to talk up the Arkansas program.

"Our family is looking forward to sharing with prospective parents and student-athletes regarding why Justice chose the Razorbacks," Fitz Hill said in the statement. "But it's not complicated ... we believe in Coach Anderson's and we love the Razorbacks. Just as Justice has made a commitment to Coach Anderson, as parents of a student-athlete, we are also making a commitment to help Justice continue to prepare and stay grounded as a student and an athlete."

The younger Hill will continue a strong family tradition with Arkansas. Fitz earned his doctorate from Arkansas in May 1997 while on Houston Nutt's coaching staff. Cynthia Hill earned three degrees at Arkansas -- a master's, an educational specialist degree and a doctorate.

Their oldest daughter, Destiny, graduated from Howard University School of Performing Arts and was enrolled as a graduate student at Arkansas the during the fall 2015 semester. She is interning with the American Ballet Theatre in New York this semester. Another daughter, Faith, is a sophomore and is majoring in apparel studies.

Fitz Hill said he will accompany his son to numerous basketball events over the next few years and will use the opportunity to help convince other top talent to look at the Hogs.

"Now that Justice is committed to the Razorbacks, I can be his biggest recruiter," he said in the statement. "Because I'm a parent, not an alum. So I said we're looking for four or five other players, and once they're identified, I can share with their parents why Justice chose Arkansas because I believe in Coach Anderson and the relationship I have with him, this is a man I trust. I'm trusting him with my son and Marcheita will be his mom away from home. We have that relationship and I'm certain that both of them will do the same with your child."

Oral commitments are nonbinding. Hill is the first commitment for the 2019 class.