It all worked out for Sutton, Hogs 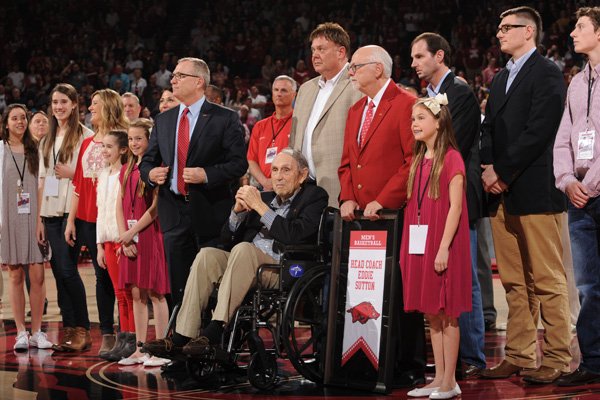 Former Arkansas coach Eddie Sutton (center) watches Saturday, Feb. 20, 2016, as he is surrounded by family, administrators and former players as a banner honoring him is dedicated in Bud Walton Arena during a ceremony at halftime in Fayetteville. Sutton coached Arkansas from 1974 to 1985 and led the Razorbacks to the Final Four and a third-place finish in 1978.

FAYETTEVILLE -- From Rickey Medlock, Steve Price and Rayfus Buckner whom he inherited from previous Arkansas Coach Lanny Van Eman, through Allie Freeman and Stephan Moore who played just their freshman year for him and their last three for Nolan Richardson, Eddie Sutton's Razorbacks turned out Saturday to honor Arkansas' coach from 1974-85.

Almost all the great ones, Sidney Moncrief, Ron Brewer, U.S. Reed, Scott Hastings, Joe Kleine and Charles Balentine, were there, or like Marvin Delph, had explained why they couldn't be.

Every bit as important, the role players, all coached with the same detail that Sutton coached his stars, turned out too.

It seemed only death, distance and commitments made before the announcement of Saturday's halftime ceremony raising Sutton's banner at Walton Arena prevented 100 percent attendance from those who played and assistant coached for Sutton during the Arkansas portion of a Hall of Fame career spanning 806 victories for five schools.

Everyone came together in greatness.

Even retired Athletic Director Frank Broyles and Nolan Richardson, the hall of fame coach who succeeded Sutton for 17 years, were seen chatting at the reception for Sutton at the basketball practice facility prior to Arkansas' 84-72 victory over Missouri at Walton.

Broyles hired both Sutton and Richardson, and while at times clashing with both, including in the courtroom with Richardson, all bygones were bygones on this special night.

Broyles bettered their careers by hiring them and they bettered his career by spectacularly succeeding. Best of all they all bettered Arkansas, the place Broyles and Richardson show they love by still living here and that still loves Sutton, not only from the turnout from his old players but Arkansas old friends also attending the reception and game.

"Believe me, there is nobody that loves Arkansas more than I do," Sutton told the 13,000 plus at Walton Arena to a standing ovation.

Thoracic surgeon Dr. Jim Counce, still Jimmy Counce to Razorbacks fans recalling him as the blue-collar forward teamed with "Triplets," Moncrief, Brewer and Delph on Sutton's run the league table Southwest Conference champions of 1977 and Final Four team of 1978, should be commended as the event's initiator.

Arkansas Coach Mike Anderson and his Razorbacks did their part, too.

Struggling through a three-game losing skid including a stunner at home vs. Auburn last Wednesday, they beat Missouri start to finish enabling Sutton to address a victorious Razorbacks team proud to be addressed in Saturday's postgame.

"He's a legend here and he was the pioneer of this basketball program," Hannahs said. "You definitely don't want to lose on someone's night like that."