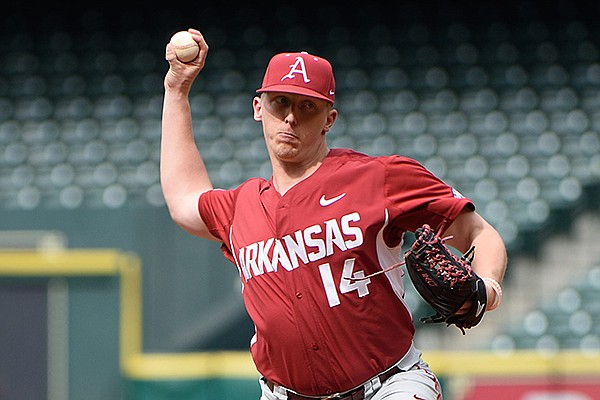 Arkansas' Doug Willey throws a pitch during the seventh inning of a game against Texas Tech on Sunday, Feb. 28, 2016, at Minute Maid Park in Houston.

Arkansas showed both characteristics during an impressive weekend at the Shriners Hospitals for Children's College Classic in Houston. The Razorbacks improved to 8-0 with wins over Rice, Houston and Texas Tech.

Rice and Houston are ranked 18th and 24th, respectively, in the coaches' poll. Two years removed from a trip to the College World Series, Texas Tech looks every bit of an NCAA postseason team.

Many will focus on the offense that hit five home runs and crossed the plate 27 times, but Arkansas is coming home undefeated because of a bullpen that has reloaded after a lean season a year ago.

The Razorbacks paraded out arm-after-arm in the 12-3 win over Houston and 10-6 win over Texas Tech. They had to because starters Blaine Knight and Keaton McKinney combined to record eight outs.

Losing starters so early would be the end of some teams, but the Razorbacks' bullpen was up to the task. It gave up several hits and issued some walks, but recorded critical outs when needed.

Counting Zach Jackson's three-out save Friday against Rice, 12 relievers combined to give up three runs in 18 1/3 innings in Houston. You won't find those kinds of numbers many places in college baseball.

Arkansas coach Dave Van Horn has repeatedly said, "We're all about the bullpen here." The Razorbacks have a strong collection of arms this season - a mixture of veteran right-handers and freshmen lefties.

Their results have been strong to this point. Through eight games, the Razorbacks' relievers have a combined ERA of 1.49.

It's a long way removed from this time last season when the bullpen gave up nine runs in an inning to Maryland and gave up 12 runs over the final three innings to Gonzaga.

Those losses built character in a team that eventually rebounded from a bad start with a trip to the College World Series. With several upperclassmen back, that experience was evident from the Hogs' poise in Houston.

The Razorbacks built an eight-run lead early and never allowed Houston to get close. They then overcame an early deficit against Texas Tech that may have overwhelmed less experienced teams.

Seniors, a rarity in college baseball, were key to Sunday's win. Michael Bernal had the go-ahead home run; Rick Nomura and Cullen Gassaway had RBI hits and helped turn double plays; Tucker Pennell hit two doubles and scored with heads-up base-running; and Doug Willey, a senior transfer, picked up two outs to get out of a bases-loaded jam in the seventh inning.

Against a regional-caliber field, the Razorbacks looked like the most complete team in their games in Houston, setting expectations high for the rest of the season.