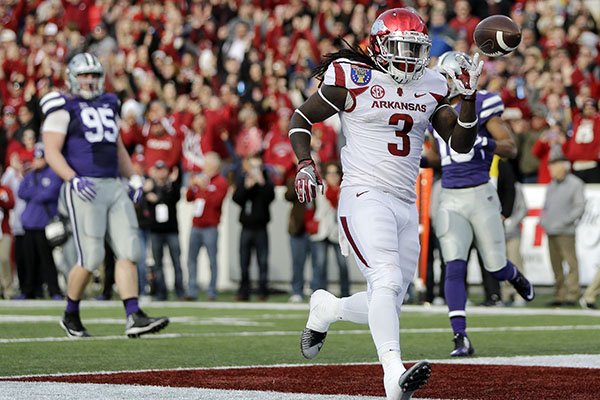 Arkansas running back Alex Collins (3) scores a touchdown on a 13-yard run against Kansas State in the first half of the Liberty Bowl NCAA college football game Saturday, Jan. 2, 2016, in Memphis, Tenn. (AP Photo/Mark Humphrey)

FAYETTEVILLE — Bret Bielema gave some insight into his sales pitch to get Alex Collins to return to the Razorbacks for his senior season on the Paul Finebaum Show Friday.

The Arkansas coach flew to Florida with running backs coach Jemal Singleton and academic coordinator Chris Johnson to meet with Collins on Wednesday.

Although the star running back still hasn't made a decision, Bielema said Collins enjoyed seeing Johnson.

"He lit up like a Christmas tree when he saw Chris because he knows how much he's helped him in the academic world," Bielema said. "I think one of the biggest factors we have going for us on Alex to return is he wants to get that degree.

"He wants to get something that maybe at one point in his life he didn't think was possible."

Also on the Finebaum show, Bielema talked about accomplishments he could achieve if he returned to school, which he presumably gave Collins during their meeting.

-become the first SEC player and one of only nine players in NCAA history with four 1,000-yard seasons

If he leaves, Collins would be the sixth-best running back available in April's draft, according to ESPN's Mel Kiper Jr.

The deadline for underclassmen to declare for the NFL Draft is Jan. 18.