Hogs can't rely on 3-pointers to save day 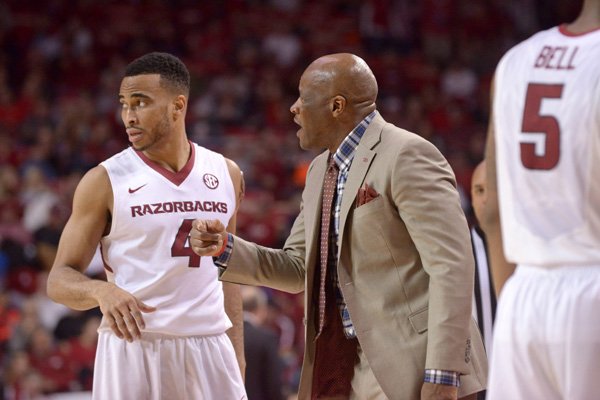 Arkansas coach Mike Anderson talks with Jabril Durham on Saturday, Jan. 9, 2016, during the game against Mississippi State in Bud Walton Arena in Fayetteville.

FAYETTEVILLE -- Any team that lost as much talent as Arkansas Razorbacks lost off last season's 27-9 team should exude gratitude for any victory.

He lauded the incredible three-point shooting of guards Dusty Hannahs and Anthlon Bell, who combined for 13 of 20 on three-pointers and finished with 26 and 25 points, respectively.

Nevertheless, the coach gave his team an earful Saturday and likely addressed the same issues Sunday as they prepped for Tuesday night's SEC game against Missouri in Columbia, Mo.

Great shooting -- Arkansas made 16 of 24 on three-point attempts -- can shroud a multitude of sins, like the fact Mississippi State outscored Arkansas 28-14 in the paint, 14-5 on second-chance points, 6-2 on fast-break points, 13-5 on bench points and 22-20 off turnovers

Easy atonement for such sins cannot be counted upon again.

Hannahs and Bell made it look easy, but shooting performances like they blazed Saturday don't come easily.

Even great shooters don't consistently nail it game after game.

Just the preceding game, last Tuesday's 90-85 overtime victory over Vanderbilt at Walton, Hannahs made 2 of 11 shots.

Bell was Arkansas' only successful three-point shooter, 6 of 10, against Vanderbilt. Hannahs and point guard Jabril Durham attempted the other four three-pointers and missed them all.

But Arkansas turned it over eight times in that game, while pressuring Vandy into a whopping 26 turnovers.

The Razorbacks committed more turnovers (9) in the first half Saturday than the entire 45 minutes against Vandy.

Anderson relayed that note between halves.

"He got on us big," Bell said. "That's how they were scoring most of their points, off our turnovers. Either getting easy baskets or getting to the free-throw line. We knew if we cut down on the turnovers, everything else would take care of itself."

Arkansas did slightly better with seven turnovers in the second half, but getting outscored 22-20 off turnovers is a concern for Anderson after outscoring Vanderbilt 29-9 off turnovers on Tuesday night.

Arkansas' 16 turnovers against Mississippi State weren't against a pressing defense but a collapsing zone mostly aimed to deny the ball to Arkansas center Moses Kingsley inside.

"We didn't do a good job taking care of the basketball," Anderson said. "That's one thing I was really upset with our guys because I thought we were kind of lethargic against their zone. We were fortunate to win the game. We made some shots."

They must make shots to win any game, but if the Razorbacks are to improve on their 0-6 record from away Walton Arena when they play on Tuesday in Columbia they must turn back Saturday's turnover trends in Fayetteville.