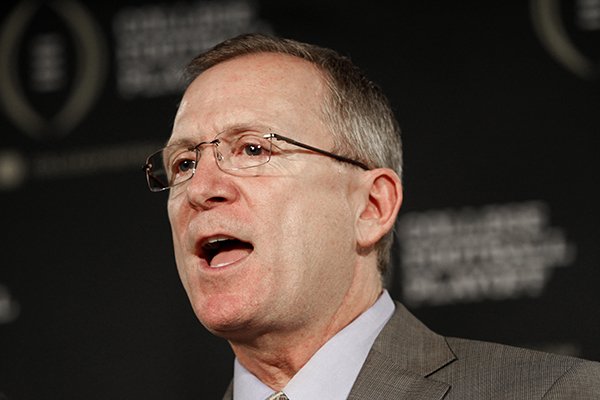 "It is difficult to accurately express my sincere and deep appreciation for having been chosen by the 10 FBS Commissioners to serve as the first chair of the College Football Playoff selection committee and then to be chosen for my second term by my fellow committee members," Long said in a statement released by the University of Arkansas. "It was extremely meaningful to me personally and professionally."

Long, who will continue to serve his final two years on the committee, said he was extremely proud of the committee's work the past two years and that he was "confident we accomplished our mission."

He also thanked the UA administration for its support while he has fulfilled his obligations as chairman of the committee.

CFP executive director Bill Hancock said the position of chairman was meant to be for one or two years.

"Jeff was a terrific first chair of the committee," Hancock said in a prepared statement. "He was a respected leader inside the committee room and an effective and honest communicator outside."

The Razorbacks had plenty of exposure at the highest level of college football the past couple of years. Long's role as chairman made him the face of the committee. He engaged in a weekly interview on ESPN on Tuesday evenings after the release of the committee's rankings the last several weeks of the season each of the past two years.

Long's second year as chairman ran a little more smoothly than the first, culminating in Monday night's championship game, which was an exciting game and a ratings bonanza.

The game drew a 16.0 combined rating, the third best for any event aired on ESPN.

The choices for the four playoff teams were more clear cut this fall than in the first year of the CFP, when Big 12 co-champs Baylor and TCU had arguments for being included in the playoff ahead of one-loss Ohio State, which won the championship.

Hancock said in his statement that the CFP management committee, comprised of 10 conference commissioners and Notre Dame Athletic Director Jack Swarbrick, is expected to choose the next chairman by the end of January.

Long is serving a four-year term on the committee with Tom Jernstedt, Dan Radakovich, Tyrone Willingham and Steve Wieberg.

Selection committee members who are cycling off this year are Mike Gould, Tom Osborne and Mike Tranghese.