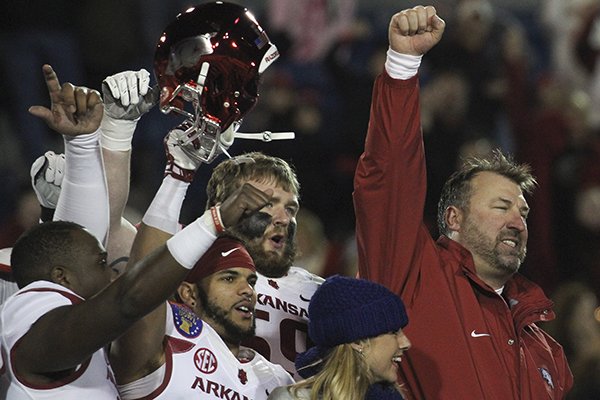 Arkansas will see an All American Juco prospect this week.

Hog receiver commitment Jordan Jones of Smackover will make an unofficial visit this weekend to help recruit the prospects visiting.

A source said Arkansas is in very good shape with commitment Kiel Pollard, 6-2, 225, 4.68 of Moultrie (Ga.) Colquitt County. He visited the Gamecocks Saturday through Monday.

Another highly regarded prospect committed elsewhere will visit this weekend or the Jan. 29-31 weekend.

2018 guard Christyn Williams of Central Arkansas Christian received an offer from Connecticut on Sunday. Arkansas was the first school to offer.

Doucet has narrowed his list of more than 20 offers in no particular order to Arkansas, Oklahoma and Louisville.

It will be Bielema and running backs coach Jemal Singleton making an in-home with Daniels and family. Smith will not be on hand. Bielema and Singleton are expected to arrive about 8 tonight.

Ok, lets try again, running backs coach Jemal Singleton and linebackers coach Vernon Hargreaves will be making an in-home with Daniels and family. They are expected to arrive about 8 tonight.

Bielema will make an in-home visit next week.