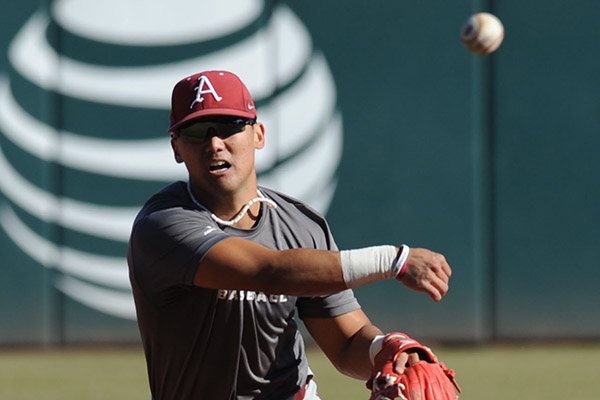 Rick Nomura of Arkansas makes the relay to first Friday, Jan. 29, 2016, during practice at Baum Stadium in Fayetteville.

Temperatures in Fayetteville were forecast to reach close to 70 degrees for the first day of the preseason drills - a stark contrast from preseason openers in the past. Just last year, Arkansas was forced indoors for several preseason practices and players shoveled snow off the field the day before their first game.

"That was the first time I had seen snow," said second baseman Rick Nomura, a native of Hawaii. "That was a good experience for about two hours.

"Today is perfect. It's starting to feel like Hawaii a little bit."

The unseasonably warm temperatures are expected to stick around for at least a few more days. That is welcomed news for the Razorbacks, who are scheduled to scrimmage as much as they can while the weather allows.

Although Arkansas opened a state-of-the-art indoor facility last year aimed at maximizing practice time during cold-weather months, the team is still limited in what it can do indoors.

"Inside, we can have it as quiet as we want or as loud as we want," Van Horn said. "We can communicate and talk a lot easier when we're trying to teach something. But out here you're really feeling what it's like to play the game.

"You play baseball in the wind and the sun - the elements like the background and the glare."

A new background the Razorbacks are becoming acclimated to this preseason is a giant video scoreboard in right-center field. The HD screen is 25 feet tall and 71 feet wide - 15 times the size of the previous screen - and is touted by Arkansas as the largest in college baseball.

"When they were putting it up, Coach Van Horn was telling us that it was going to be the size of the whole (structure), and he wasn't lying," Nomura said. "It's a huge scoreboard. They turned it on the other day and it lit up the whole sky. It was unreal. It was amazing."

One of the highlights of the first scrimmage was infielder Carson Shaddy's home run off preseason all-America pitcher Zach Jackson.

The at-bat was a promising sign for Shaddy, who has spent the last several months rehabbing from Tommy John surgery. After beginning his career as a catcher, Shaddy is in contention to be the Razorbacks' starter at third base this season.

"We're just making sure his arm is healthy, which we do think it's going to be" said Clark Eagan, who is battling Shaddy at third base. "He's looked good there. He's a very quick, athletic guy that has a very good arm. He's really transformed well."

Jackson, who became one of college baseball's premier closers last season, may start some this year.

Van Horn said he's unsure how he'll use the power right-hander, but said he would prefer to have him remain in the closer role.

"If the season started tomorrow we'd ask Zach to close games for us," Van Horn said. "He could start, he could come in and throw you four or five (innings) in the middle. I think we're going to use him a little bit as a wild card. Honestly, I'd like to pitch him two or three times a week.

Jackson said he would like to have an opportunity to start, but is willing to do whatever is asked.

"I want to win and get off on a good foot," Jackson said. "Whatever my role is, I want it to be winning."

Arkansas will scrimmage again Saturday at noon. The scrimmage is open to the public.