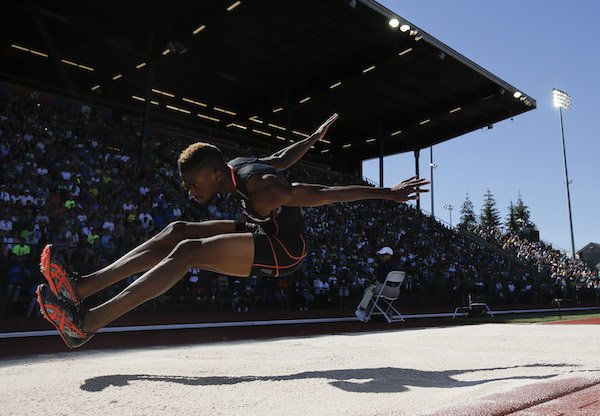 Henderson, who was born in North Little Rock and attended Sylvan Hills High School, won his second U.S. title by going a slightly wind-aided 28-2 1/4 to edge Lawson, a three-time NCAA long champion for the Arkansas Razorbacks, as both qualified for their first Olympic team in Rio de Janeiro.

Lawson, a senior this year who was a 19-time All-American at Arkansas in the long jump and sprints, went a personal-best 28-1 3/4 to finish a half-inch behind Henderson.

Henderson's winning jump came with a tailwind reading of 2.9 meters per second. Any mark with a reading over 2.0 is considered wind-aided. Lawson's top mark came with a 1.8 reading.

Lawson, competing at Oregon's Hayward Field where three weeks ago he won the long jump and 100 and 200 at the NCAA Championships, became the ninth American with a legal long jump of more than 28 feet, according to USA Track & Field.

Lawson ran in the 100 semifinals and final before and after the long jump final. He finished seventh in the 100 final in 10.07 seconds after running 10.01 in the semifinals.

Former Razorback Tyson Gay took fifth in the 100 final in 10.03 and likely will make the U.S. Olympic team in the 400 relay group.

In women's competition, Taylor Ellis-Watson, a senior at Arkansas this year, should make the U.S. team as a member of the 1,600 relay after taking fourth in the 400 Sunday, running a personal-best 50.25.

"Traditionally they take the top six finishers in the 400, so I would say fourth is a very secure spot for Taylor," Arkansas Coach Lance Harter said. "They want her on the team.

"She's going to Rio with the opportunity to represent her county, which is a dream come true for that young lady."

Ellis-Watson was an 11-time All-American in two years competing at Arkansas after transferring from Pittsburgh.

Performances in an athlete's senior year still count toward college records and Lawson became the second Razorback to long jump 28 or more feet along with Erick Walder, who as a senior in 1994 went an NCAA record 28-8 1/4.

Lawson also is trying to make the Olympic team in the 200, which has first-round races Thursday.

Kenzo Cotton, a sophomore at Arkansas this year, ran 10.11 in the 100 semifinals and didn't make the final.

Former Razorback Chrishuna Williams will run in the 800 final today.