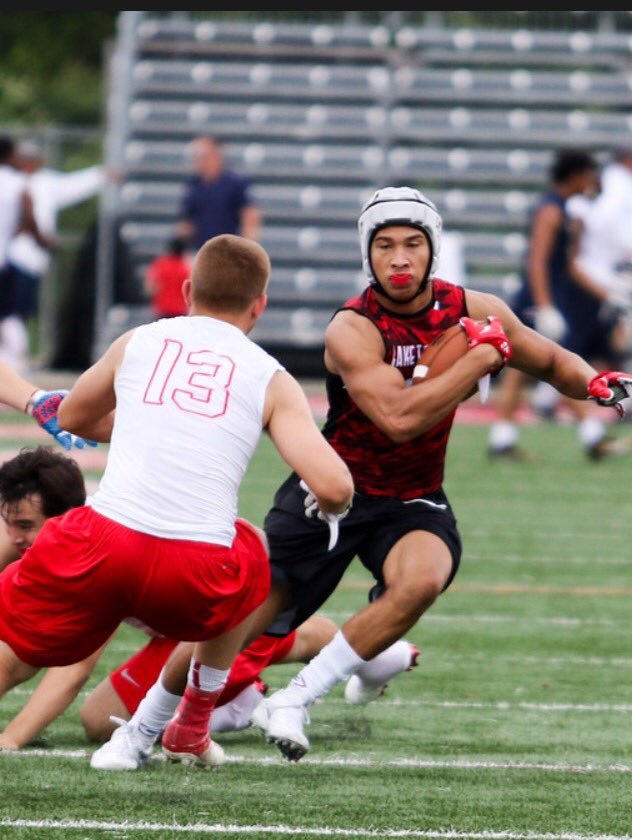 Arkansas commit Maleek Barkley and the Lake Travis Cavaliers qualified this past Saturday for the Texas State 7-on-7 tournament to be held in College Station in July.

Arkansas receiver commitment Maleek Barkley has shined during the offseason by adding bulk and strength for the coming season.

Barkley and his Austin (Texas) Lake Travis teammates are getting ready to compete in the Texas state 7-on-7 tournament to be held in College Station on Friday and Saturday.

“We hit the weight room hard and run a lot,” Barkley said. “This is when we really start to grind this summer.”

Barkley has seen his bench press go from 235 pounds to 285 in about two months.

“We work out so much,” Barkley said. “No one knows how much we work out.”

He transferred to Bishop Gorman High School in Las Vegas in January but had a change of heart and moved back to Texas in the spring. While in Nevada, Barkley lost weight but has regained it.

Dave Campbell’s preseason magazine is predicting Lake Travis to capture the Class 6A state title this year and Barkley is a big reason.

“My main position right now is running back,” said Barkley, who talks to Hog receivers coach Michael Smith on a consistent basis. “I’m going to switch to receiver, too. I’m going to have to run sweeps from running back … that play is really good for me, too, because I’m a lot faster than everyone.”

He believes his speed has also increased.

“I think when I was at Gorman, they got me a lot faster,” said Barkley, who recorded 10.54 seconds in the 100 meters as a sophomore. “Coach told me if I got my start down perfectly, I would run a 4.3 consistently. I feel like I’m a lot more explosive and a lot faster out of my cuts now.”

Barkley chose the Razorbacks over scholarship offers from Illinois, Nevada-Las Vegas and Texas State in early April. He has since added an offer from Utah and is also drawing interest from Oregon, Oregon State and Washington State.

He plans to visit Fayetteville on July 21 with mother and his younger brother, 2018 Lake Travis receiver Isiaha Conner, who was the freshman team Offensive MVP and last year on junior varsity.