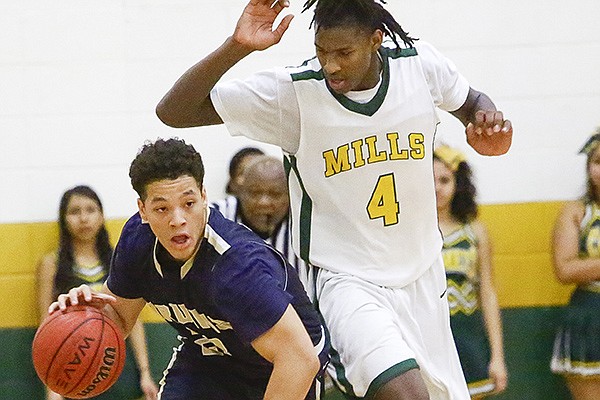 FAYETTEVILLE — As Arkansas commit Darious Hall sat in his Spartanburg, S.C., hotel room Wednesday getting ready for the Adidas Gauntlet Finale to begin Thursday, he was contemplating what might be a future Big 3.

“I’m trying to think of the right way to put this,” Hall said. “But if can get him to Fayetteville, too, well, we are just going to be able to punish some people.

“Khalil has a lot of length and is a great scorer. We could do some great things for Arkansas together. That would be cool to do it for our home state.

“I know the (Razorback) coaches are out here working hard and we have a great future.”

While Hall may be the lowest-rated of that trio, he might also be having the best AAU spring and summer of the three.

Hall has averaged 15.9 points, 8.8 rebounds and an assist per game for Team Magic Elite, which start pool play Thursday with a 9:30 a.m. CST game against Florida Sons.

“I have had a lot of success taking it to the rim and also on my shot of the dribble,” Hall said. “I’m still working on my 3-point shooting, but I think that I have improved a lot this spring and summer.”

“There is a lot of great competition and I think that has helped me get better,” Hall said.

Team Magic Elite, coached by Eric “Cowboy” Robinson, will also play in tournaments in St. Louis, Memphis and Las Vegas before the month is over.

“It’s all about just finishing strong,” Hall said. “I’ll get some rest after it is over with, but I am also going to get right back in the gym.”

The Arkansas Hawks will be playing in the Adidas Gauntlet 16-and-under division after putting up a 20-3 record during AAU spring and summer action.

The Hawks play Thursday at 4:20 p.m. CST against the winner of Thursday’s earlier game between Wiz Kids and Basketball University.