SEC will work with Razorbacks after Michigan cancellation 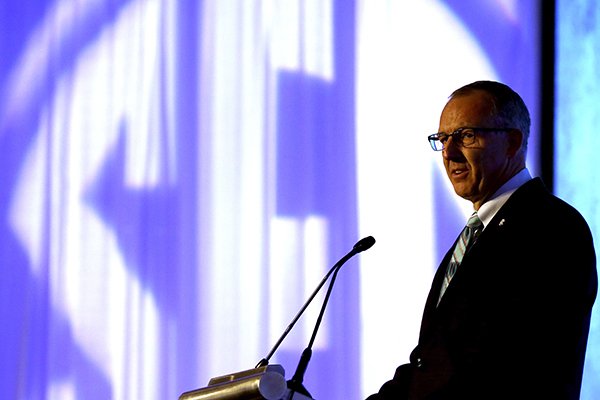 FAYETTEVILLE — In an email Thursday, Southeastern Conference commissioner Greg Sankey indicated the league is monitoring Arkansas' scheduling issue created when Michigan opted out of a series for the 2018 and 2019 football seasons.

The SEC requires its teams to play at least one Power Five opponent each season, or against independents Notre Dame, BYU or Army. Sankey said Arkansas can request a scheduling exemption if it is unable to find a suitable nonconference opponent for one or both of the seasons in which Michigan was previously scheduled.

"Given that an executed contract has been in place and considering the lateness of this cancellation, we will certainly work with Arkansas on this issue as it relates to the SEC's nonconference scheduling requirement," Sankey wrote. "Institutions are permitted to seek a waiver from the conference office when extenuating circumstances exist."

The timing of Michigan pulling out of the series puts the Razorbacks in a tough position to find a replacement. Arkansas now has to find a major opponent for three of the next five seasons, while many teams that would satisfy the SEC's scheduling requirement are either booked completely or already have at least one Power Five team on the schedule.

Before Michigan's cancellation, the Razorbacks were in need of a power five opponent to play in 2020. A scheduling quirk left Arkansas with a one-year void in marquee nonconference opponents. The Razorbacks are scheduled to play Texas in 2021 to complete a series that began in 2008.

Because they play nine-game conference schedules, many Big 12, Big Ten and Pac-12 teams have at least one Power Five nonconference game on the schedule through 2020, and many are booked through the next decade. Many schools have indicated they won't play more than one Power Five team out of conference per season.

Like the SEC, the ACC plays an eight-game conference schedule and can schedule one extra nonconference game per year. Independent teams also have scheduling flexibility, although their future schedules fill up quickly.

There are a number of ways Arkansas can remedy its scheduling predicament. One option unavailable previously is to schedule a neutral-site game in 2018 and home-and-home series the following two years.

The Razorbacks could also schedule a series that includes one or more gap years or a 2-for-1 home-and-home agreement, such as other teams have recently done. Or Arkansas could schedule neutral-site games in multiple seasons. Such games pay millions of dollars to the participating teams.

Scheduling logistics are tough, but especially at Arkansas, where the program is under contract to play one or two games away from its campus each season. The Razorbacks are scheduled to play one game in Little Rock through 2018 and its series against Texas A&M in Arlington, Texas, takes away another home game in alternating years.

Long has previously said Arkansas will not play fewer than six games per season at its on-campus stadium, which is about to undergo a $160 million renovation to be completed by 2018.